Mom and I went to Starbucks today for a little breakfast, and I wanted something hot and filling, but not too rich, so I ordered this piadini.

Contrary to what I first thought, piadini, or piadina, is not a word invented by Starbucks marketing executives to seem avant garde and homemade. It’s an actual Italian food, a sort of taco-flatbread thing served with meats inside. I ordered the sausage, egg, and cheese piadini.

The piadini is lighter and fluffier than it originally looked in the case. The bread is some sort of foccacia bastardization with green flecks in it. The green flecks could be boogers or green dye for all I know. Their flavor is never again mentioned in the context of the food. The filling is nice and hot, and the bread is crispy instead of simply tasting reheated.

As for the flavor, the sausage and cheese are rich and gooey, but the egg is flavorless. It exists. I can feel its presence, like the ghost of a dead grandmother or a lingering elevator fart, but lacks any actual substance within the melding of the pastry.

It’s good. Would I order it again? I’m on the fence. It’s a nice, hot meal, but at $3.25, you’re better off with a McGriddle. Cheaper, tastier, and much more filling.

Got four flavors of gourmet bagels yesterday, in the mail.

The flavors delighted me. I was all too pleased to try them. Being Jewish, I’ve discovered many a bagel in my life. They were a traditional staple of our household in Sunday mornings, and made all sorts of good recipes. Many was the day where I’d come home to look in the freezer, only to find that paper bag stuffed full of bagels.

These four flavors of bagels were no less than the ones we had, some slightly less kosher, though. My sampler pack, from Eleanor, also known as eeka13 on etsy, had a vegan apple cinnamon, a garlic, onion, and the crown glory, a bacon cinnamon bagel.

The bagels came wrapped neatly in wax paper, which I highly appreciated because there’s nothing worse than biting into something and finding that whatever it’s been mixed with in the packaging has contaminated its flavor. Each was labeled so I could easily seek the bagel I so desired. The first bagel I tried was the vegan apple and cinnamon. To be quite honest, I wasn’t as excited about this bagel than the others, for good reason. I mean, someone managed to put bacon in a bagel. But I popped it in the oven and got on with it.

The funny thing is, it was much better than I had originally assumed! There was an apple glaze on top, and the bagel was delightfully infused with lots of cinnamon flavor. If this was vegan, I wouldn’t have guessed. The cell wall definition was great, many tiny bubbles infused in it, with only the smallest of yeast-like tastes to it. Overall, this was a really great bagel for vegans and non-vegans. The next bagel I tried was the onion bagel, with pieces of purple onion on top. It was attractive, all the bagels were. They are chubby for miniature bagels and have a pretty wash on top to make them shiny.

The onion bagel smelled like onion, but when sliced, the taste had not much onion at all. The top half had it, but not so much the bottom, and I think that was only because the top had the pieces of onion on it to begin with. It wasn’t as bubbly with the cell wall, and had a crumblier texture than the others. I wasn’t too impressed. The garlic bagel was another one that I didn’t expect to be as good as the others, but one that completely blew me away. Slicing into it, it had a mild scent of garlic, with a nice texture and softness to the inner bread. When I toasted and ate it with butter, it was like eating garlic bread from a restaurant. It toasted perfectly, with an outer shell for a good, crunchy crust, and a delicious inner fluffiness that was almost infused with garlic flavor.

This bagel was also great with cream cheese. The last bagel was the cinnamon and bacon bagel. This was a monstrous bagel, even for a miniature. If this bagel was a horse, it would be a slightly obese Shetland pony. Anyhow, the taste. Unfortunately, this bagel was a little more crumbly than the garlic, the standard by which all bagels are now judged, but toasted up nicely.

Topped with a little bit of butter, this was not a bad bagel at all. I just wasn’t as impressed with the flavor as with the garlic. There wasn’t as much cinnamon as in the vegan bagel, and the pieces of bacon were present, but not as flavorful. I really wished that this had more flavor to it. 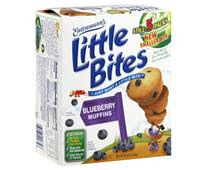 My sister had these, so I decided to try a pack. Little Bites has this industrial strength, thick, white packaging normally reserved for classified documents and condoms. I’m not sure why they do this. It can’t be to keep the muffins from crushing, because they’re already flattened when they come out. So what is it? Sun protection?

The muffins are small, and there are only four of them. It looks like there are real blueberries in them, which is a plus. They look like little purple toadstools to me. Eating them is an interesting experience. These muffins are so oily that you can swallow them whole. I tried to eat them bite by bite, but no dice. They still slid down my throat like luge athletes.

I’m not a fan of these. Their motto, “I just want a little bite!” reminds me of those little assholes in elementary school who would always try and mooch off your lunch. That pisses me off. I was that mooch. To me, the plea of these muffins mocks me. 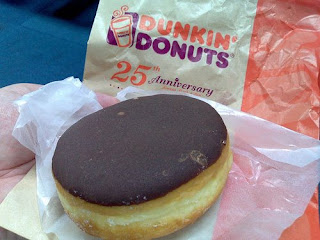 Mmmm…doughnuts. Nothing better than those.

D&D ran a contest about a month ago, and I genuinely hope I win. Why? Because I got to create the ultimate doughnut.

See, I love Boston Creme. It’s a love hate affair between the two of us. On one hand, I love the glaze, the cream, and the overall gooshiness of the product, but the cake…it’s just bleh. I love their glazed sticks- that’s good cake, but this is more of a Wonder-bread like product than their cake doughnuts, and it brings an almost neutral, bland taste to the entire thing.

I love it. I just wish there was more sugar and flavor, and that’s why I created my doughnuts.