I’ve been eating out of the freezer lately, going through the deep recesses of my ice box to grab whatever strikes my fancy as edible. I realize that most freezer foods aren’t haute cuisine, but shit, it’s summer, and damned if I have any effort or motivation to cook something.

Yesterday, while with The Brownie Whisperer, we decided to heat up two Red Baron mini pizzas. These pizzas are roughly the size of a small frisbee, a bedside table clock, or one of Flava Flav’s necklace watches. About five inches in diameter, these are pretty large for miniature pizzas. They are about 3/4 of an inch thick, with a nice, crispy crust on the outside.

I strongly recommend making these in the oven. When they come out, the crust is crispy, with a slight oiliness on the bottom, and an almost buttery flavor. The depth is perfectly proportioned- not too crispy, but not deep enough so that the fillings make the pie soggy.

The cheese covers each pizza perfectly, and there’s enough pepperoni on the pie so one gets a good chunk in each bite. The sauce is typical frozen pizza sauce- too sugary, reminiscent of a watery spaghetti sauce mixed with kool-aid or something. But that’s the norm. I’ve never had a frozen pizza where the sauce has been decent.

All in all, not a bad snack. I’d easily eat two of these in one sitting. 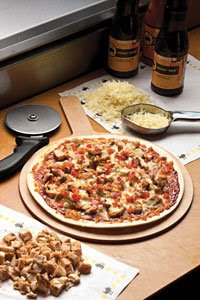 I went to the Buffalo Wild Wings restaurant today with some co-workers. It’s a nice place, new, and has lots of televisions and good deals on wings, like forty cent traditional wings on Tuesdays. We got takeout and took it back to work.

I ordered the garlic parmesan chicken flatbread “pizza” thing. I thought the crust would be much puffier, like a gordita bread, soft, but it was basically a brittle and cracking tortilla wrap with sauce and meat on it. The chicken was a nice, soft white meat, good chicken, sprinkled liberally throughout the pizza. There was enough sauce on it so that everything stuck to the bread without falling off and making a mess.

The flatbread was easy to eat, but was just overbearingly crispy and very dry. The chicken was moist, but the cheese was melted on in such a crispy way that it lost any gooiness of a pizza and was just hard and tough to break through in my mouth. The parmesan garlic sauce was good, a little spicy, and tasty. It was more garlic than parmesan, but was smooth and not chunky or too overbearing.

The french fries were absolutely disgusting. For some reason, every time I go to BWW…sorry. BWW sounds like a bad personal ad. But every time I go there, my food is always a shade lukewarm. The fries were no exception. No fry I got was longer than an inch or an inch and a half and they were skinny and absolutely soggy to the touch.

Each fry was greasy, despite being overly soft and mushy, and had no salt or pepper flavor to speak of. I didn’t even finish half of these fries. They were absolutely awful. If you go to BWW, stick to their Buffalo Chips or sour cream and chive potato wedges.
0/10- INEDIBLE 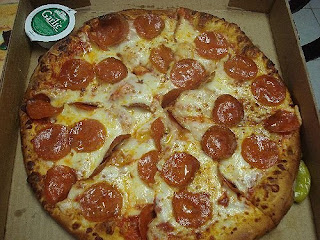 I started the first day of my new job today, and we ordered pizza from Papa John’s for lunch. Never had Papa John’s before, but from what I have heard, it’s a relatively comparable chain brand, most people calling it better than Pizza Hut or Domino’s.

So the pizzas came, and to be honest, I was a bit worried. They were pretty tiny to feed eighteen people, but each piece was surprisingly filling. I had two slices and was full. Could have eaten three, but we are all good sharers in camp and took enough to feed everyone. The pizzas themselves remind me of a really well-cooked frozen pizza- the way the box wants it to look. There are those little delicious crispy dots on the cheese, saying that it’s cooked, and the color is nice and even.

The pizza itself is good, a softer and thick pizza, but not quite as thick as the DiGiorno’s I had to completely eliminate it from the pizza category. The crust is good, if a little dry. The pepperoni was all over the pizza, which was good, and it was a nice, thin slice of meat with good flavor and a nice chew to it. There was a sauce labeled only as “Special Garlic” boxed in with the pizzas, and that was quite intriguing. I’ll eat anything that looks like badly typed Engrish in Comic Sans.

I opened the sauce and found a yellow, melty substance, that could only best be described as pee. No, not pee, but it just looked like melted margarine, not a special sauce. I dipped it in my crust. Not garlicky. Not special. Just sauce. Margarine sauce.

Overall, the pizza was good. I’m not sure if I’d get it again as it is just a tiny little thing and not really worth the money, but was tasty. That being said, my pizza chain alliance lies squarely with the stuffed crust enterprise. Come on. You know that’s incredible shit. 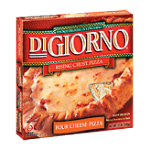 I was feeling lazy today- okay, pull my leg- and wanted pizza. Problem was, I didn’t want to be social and wait around at a pizza place with the potential of social interaction, and I didn’t want to deal with waiting for people to cook the pizza and bring it over. The surgery turned me into a bitch, I guess.

So I dropped by the grocery store to congratulate myself on my new job as a camp counselor and picked up a frozen pizza. I figured I’d get DiGiorno’s, because I wanted delivery, and it is in their motto, if you will. Hefty pizza, for starters. Very heavy.

Inside the box is a round pizza with a good amount of cheese on it. DiGiorno boasts four cheeses on this pizza, including parmesan, mozzarella, asiago, and romano. I put it in the oven and read the back. I’m always amused by the back of the packages, like how they specify that the pizza shown in the cartoon-y illustration on the box might not actually be the pizza in your oven, and such. I wonder what asshats call into customer support for that.

So I waited for the pizza, and after about twenty minutes, it came out. Visually, it’s not a very appealing pizza. The outside ring of the crust was too crispy and hard looking, and the inner, middle part was mushy looking and undercooked.

Cutting into it, though, was different. It was obviously fully cooked and had a nice texture, but having grown up around such good pizzas in my life, I don’t feel like this was really a pizza at all. What they lost in circumference of pizza, they made up for in height. I don’t like that at all. I’m used to big, wide pizzas with a good, crisp crunch to them, where you can eat four huge slices of. Three tiny and squat slices of this was half the pizza and made me feel fat. If anything, this was more like a cheesy bread than pizza. The cheese didn’t melt off and string like good mozzarella does on pizza, it congealed and lumped off.

As for the bread, the advertisement didn’t lie. The crust rose. But no more than I’d have expected a regular pizza to have risen. I gave the ends of the crust to my dog because they were almost sickly sweet and had a honeyed flavor I did not enjoy.

I guess I’m too spoiled to appreciate this. It’s a bread. I was looking for a cornmeal dusted, crispy treat that I could eat a lot of and be full from, and what I got was a dense, thick bready thing.
3/10- AWFUL