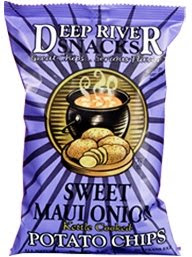 Mmmmm…the first thing you notice when you open these chips is the flavoring. It’s a lovely, powdery crust of onion, almost like grilled onions on the barbecue or buttermilk onion rings.

It’s a thick, rich onion taste, and the underlying potato chip is flavorful, all crunch and potato. The powder takes the chips and keeps them from being really oily. If you like strong flavors, this is for you. The onion flavor stays in the back of your throat, quickly mingling with the potatoey taste.

These are a local brand of chips, and boy, are they good. They’re a little pricey, and not many chips fill the bag, but they’re excellent with a sandwich. The chips are actually made with real onions, not just powder, and are definitely worth their price. 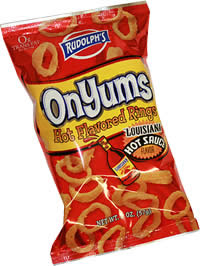 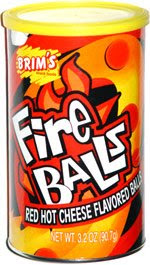