This is a series, the first of two, in which I review bakers and candy-makers who have made things and waited patiently while I recovered from my surgery to review! Sorry for being late!

This candy-maker is out of Barker, New York, and sent me a selection of truffles and delicious fudge to review. I tried the cherry chocolate fudge she sent, first. It was a nice chocolate base with mixed chopped cherries. The chocolate was a good flavor and melted nicely in the mouth with a smooth finish and none of the grainy taste and texture that fudge can sometimes have.

The cherries were a little too overpowering, giving the fudge a bit of a flowery taste to it. It’s good, but just a little too much. I liked the texture mix of the chewy cherry bits and the fudge, though. The next selection she gave me was in a little box of items. In the box were four truffles, of raspberry ganache, a walnut caramel with sea salt, a genuine Ohio Buckeye, and a chocolate ganache.

The raspberry ganache was, like the texture of the fudge, very smooth. The taste was a bit vague, and at times, I tasted more of the essence of raspberries than the taste of raspberries, but it was delicious. It was a smooth ganache, less like the fudge than a frosting-like goo, very delicious. The outer texture was good, but the real treasure was in the shape. It was a beautiful jewel of a little raspberry, something that I think would charm guests at receptions or just as a stand-alone gift.

I’ve really been broadening my culinary standpoints as of late, and two of my goals were to try salty desserts and spicy desserts. This marked the coronation of my salty dessert. The caramel was a nice piece of very buttery flavor. Having tried homemade caramels before, this was just fantastic. The walnuts were a little too chunky with this one, but the salt made a perfect mix. It was like eating gourmet salt water taffy.

The Ohio Buckeye was one I’d been dying to try, and one that Cindy touted as being an amazing treat. She wasn’t lying to me, either. This was a creamy treat, and I wish I had more of them to dissect so I can appreciate and try each individual layer. An Ohio Buckeye is basically a peanut butter bon bon wrapped in chocolate. Mmmmmm. The peanut butter wasn’t quite peanut butter, it was more of a fudgy, but frosting-like taste, and it was a delicious and melty, rich flavor. Incredible. The chocolate enrobing it was fantastic and the entire thing was just a joy to consume.

The last truffle was a chocolate ganache. This one was a surprise. The coating was the same rich flavor as the other chocolate, but the ganache inside was a little bitter. I’m not sure what was going on. It was tasty, like a semi-sweet chocolate or those natural bars, and really brought out the more subtle, woodsy flavors of cocoa, but for those seeking a sweet treat, was not exactly saccharine.

This is another bar in the truly massive selection from Newman’s Own Organics.

The chocolate is perfect, the same 34% milk base that I had in the plain bar, but with the addition of coffee. The bite is smooth, with a nice and satisfying snap to it, but virtually no coffee grounds to be seen. Where do they come from?

The answer is in the bar. You can smell them. You can definitely smell them, but unfortunately, the smell is more of a dairy creamer, gourmet coffee smell than a beany smell of freshly roasted Kona or coffee equivalent. Coffee enthusiasts, shield your eyes. What is meant to be an ingredient highlight is merely a flavor masking the chocolate, creating a pungent and fake-tasting flavor. The coffee extract.

Instead of taking a front seat and complementing the chocolate, the mocha flavor just sits there and fights with it. One minute I taste chocolate, the next minute, coffee. They argue like recently divorced couples. The chocolate melts smoothly, and that’s it. It’s an excellent milk chocolate, and I feel that by adding the extract, they really detract from the smoky, full bodiness that coffee lends to chocolate. 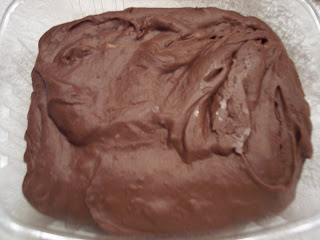 That happens to be a picture of her black forest fudge, because I do not have a camera…

This is a package from an Etsy seller, Oh Fudge! online. She’s out of Kent, Washington, and makes delicious fudge!

I got a package from her today, of new newly debuted dark chocolate fudge. Half a pound! A very generous sample for this Foodette. Upon opening the box, I was presented with a dense, dark brown fudge, a little darker than the standard chocolate you see in stores.

One of the interesting things she uses, and I personally love it when this is an ingredient, is marshmallow cream. A lot of recipes call for corn syrup or condensed milk, but I find that the marshmallow cream gives a really smooth, not grainy, and sweet texture. Like eating a really chocolatey s’more.

Well, this fudge was no exception. It was a dense, but smooth and rich fudge. It cut like butter from the package. It tasted less like dark chocolate than semi-sweet, but was definitely distinguishable from milk chocolate fudge in the intensity of the flavor. The chocolate had a bold pop in your mouth, with the sweet, creamy marshmallow taste following up.

This is an excellent fudge for dark chocolate lovers, and at a very reasonable price, too. Check out Margaret’s shop here. You will not be disappointed.

I’m trudging through this package, and my family and friends are extremely happy to reap the leftovers of what I share.

This cookie was another version of the Champion Chip line of Newman’s Own Organics. They tasted like the Hint ‘O Mint Newman-O’s minus the cream. The mint flavor overpowered the chocolate and tasted dry. I thought it would have made the texture moist, but it didn’t do much.

The chocolate chips were plentiful. I strongly recommend these with a glass of milk. They were flavorful for mint lovers, but a little too much mint for regulars like myself.

Another winner! This time, in the case of the creme and other creme-based flavors, the creme was much fluffier than other cremes, really puffing up the cookie to a Double-Stuff size. It was lovely.

The same marshmallow taste was back, but it’s not strange at all. It gave a really nice texture to it. I had been worried that, like the plains, the creme would have softened the cookies, but these were crunchy, crispy chocolate disks, like its predecessors. The creme was just delightful. Soft, gooey, and sometimes, so soft, the cookie would slide off as I took a bite. No matter. More creme for the next cookie.

What really amazes me is that all this stuff is organic. I keep forgetting it, but when you come down to it, that’s a really incredible feat and process. Preservatives are used in making things soft, and I can’t even see a trace of high-fructose corn syrup. Newman’s Own Organics has done it again, folks. 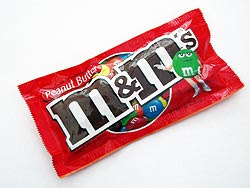 These might sound a little pedestrian, but trust me, they’re a classic. I thought nothing could beat Crispy M&Ms, but here they are, the underdog.

It’s a shame, what with the M&M franchise, that the bigger the nut, the less candy in the bag, which is why I never get the almond ones anymore. Of course, these are just as good.

The M&M isn’t bigger, diameter-wise, than your average candy, but is much taller and peaked at times, due to the little blobbette of peanut butter on the inside. It’s the same candy shell, same colors, and the peanut butter is good. It’s not like Reese’s peanut butter cup, there’s no crumble, but that would be amazing, no? It’s not like a Reese’s Pieces taste, that peanut butter hard candy. It’s just in a class of its own. To liken it to anything, at its furthest form, would be to Lindt Peanut Butter, because it’s a ganache-style butter, quite tasty and salty.

These are just classically great candies. They’re my go-to when I just don’t feel like eating anything new. I just wish there were more to a bag, because they’re addictive as hell. 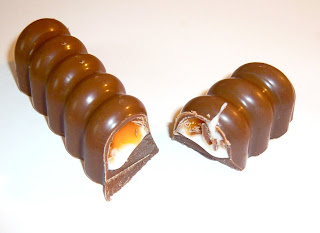 Keep in mind that prior to eating this, I had never had an actual Cadbury Creme Egg- just the Russell Stover knockoffs.

This bar- if this is any representation of what the egg is like- is incredible, and makes me extremely jealous, because Europe has such better chocolate than we.

I opened the bar and smelled rich, rich chocolate. Upon biting into it, I was treated to two clear layers of the infamous Cadbury egg- the yolk and white. The fondant wasn’t hard, and completely consistent in texture. It was just delicious, smooth, and sugary.

The chocolate is the reason why Europe will always be better. It’s smooth, rich, consistent, and doesn’t burn with sugar in your mouth. This bar is a winner. My only criticism is that in my first bite, there was a concentration of yolk, giving me a slightly bitter taste from the food dye. Perhaps this is different with all bars.
9/10- EXCEPTIONAL

Of course there would come a time when I’d review this, my favorite, most guilty foreign pleasure.

Kinder eggs are the deliciously illicit confection from overseas. It came in my package of British goodies.

Inside a chocolate egg, two-tone, is a toy. What will the toy be? It could be anything. Kinder is famous for doing strange toys…

My egg contained a little sheep on a motorbike. Awesome!

The chocolate is thin and soft, nothing special, but people buy these for the novelty.
8/10- AWESOME 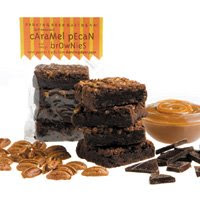 These are freaking amazing. I appreciate- really, really appreciate a good brownie. I picked these up at my local organic grocery store. Not the hippie-dippie pretentious type, just a great place for groceries with the added bonus prize of being organic and delicious.

I think I could legitimately live off of these. Not healthily, mind you, but happily and full of goo. The texture is sublime in these brownies. Honest to Dog. The pecans are perfectly applied and crunch with that wonderful roasted toasted taste, and the caramel is gooey enough and adds to the overall softness of the brownie. They use only the best ingredients here. I popped it in the microwave and almost convinced myself I’d made these by myself.

They’re a tad on the pricey side, though, that’s my only concern, but if they send me samples to review I wouldn’t complain. These brownies kick ass. The deer kicks the asses of your brownies. This deer pooped on Little Debbie.