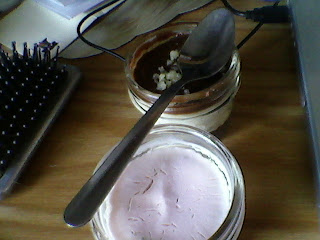 Well, kind of a two cheesecake Tuesday. I ate one a few nights ago and still need to review it, so here’s the last three cheesecakes in the Decadence Cheesecake lineup!

The first cheesecake I tried was the New York style cheesecake, a few nights ago. It was wonderful and creamy, but the flavor was somewhat bland. It was reminiscent of just a creamy flavor, without any of the often sour subtleties of the sour cream. The crust was also good. For some reason, this cheesecake was also slightly less firm than the normal standard of these cheesecakes. It was good, I’ve just had better plain cheesecakes. I tend to prefer those with a less sweet flavor than this one.

The next cheesecake, though, the one I’m eating right now, was absolutely phenomenal. This was the cheesecake that had me sold on the Decadence Cheesecake lineup. It’s a Southwestern Cactus, comprised of a blue cornbread crust with a prickly pear cactus filling and a sour cream and agave glaze. I was so excited to try this!

The texture of the cornbread crust and the creamy filling was amazing. The combination just created this moist, lovely flavor in my mouth, and there were fantastic notes of corn and salt in the middle of it. The filling is amazing. The overwhelming feeling in this is just this freshness that explodes throughout the thing, a quenching flavor. It has bits of the cactus in it for flavor, too. How cool is that? A dessert with a cactus. I’m glad it didn’t come with the thorns, but it was pretty phenomenal. 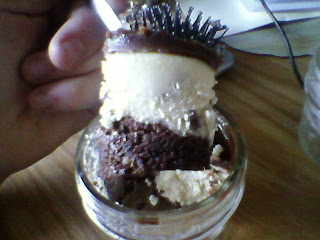 Well, it was a damned good cheesecake. But something was missing. The entire thing wafted peanut butter smells throughout my room, there were elements and subtle notes of chocolate, pecan, coconut, licorice, macadamia, and almond…but there just wasn’t enough peanut butter. Seriously. I tasted many flavors, and I did taste peanut butter, just not enough to substantiate the claim that this is a peanut butter cheesecake.

I liked it a lot, but I was confused. I’m not sure that if I’d known this was a peanut butter and chocolate cheesecake, I’d have necessarily guessed it. Still, a lovely dessert, and I can’t reiterate enough that I love the idea of desserts in jars!