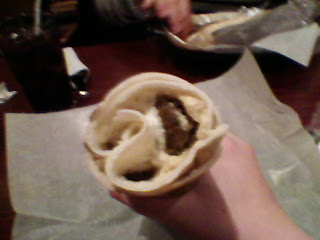 Last night MM (Mangia Massachusetts) and I went to the grand opening of a new restaurant in the center of Amherst, Moti. So Moti is in what’s known as a cursed place because of its location next to the big contender of fast food, Antonio’s. I’ve always lauded them for their pizza varieties, massive slices, and excellent prices, but sometimes you just don’t want pizza.

And if this doesn’t jinx it right off the bat, I think Moti provides adequate sustenance for that pizza resistance.

I keep complaining about the lack of a good falafel, or rather, any falafel, in the immediate area, and although I love Amounez, I don’t love traveling an hour and change to grab one. Jesus has answered my prayers. So MM and I walked in and it was moderately bustling. The waitresses were extremely attentive and friendly and made sure to omit or add all the toppings we requested. 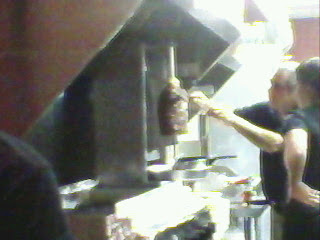 This is the back of the restaurant. Yes, that’s a massive shawarma. Yes, that man is using little to no effort because that meat falls off like warm butter. Oh my god. It was a beautiful sight.

I had to order the falafel, though, and seriously, this might become my new brand of fast food. I can easily see myself ordering this, especially at the price of $5, to take and whisk away to classes on a busy day. 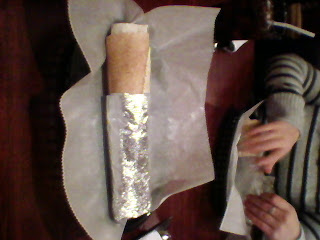 The falafel itself is like an amazing and wonderful sandwich. Easily a foot long, it’s the homemade and delicious rebuttal to Subway. The best thing about it is the style in which it’s wrapped in. This is serious fast food. Unlike regular falafels in pitas, which are great, but messy, this one never spilled a drop, even with the extra tahini and hummus I opted to add. The lavash bread was obviously homemade and still warm, and soaked up all the sauces. The falafel was flavorsome and had a really nutty taste and was nice and hot. 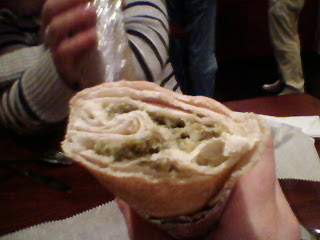 Any criticisms I have are pretty weak, actually. The falafel wasn’t as crunchy as some that I had, but that was because of the shape of the thing, and I’ll take shape over texture. The ingredient distribution was a little awkward and eventually, one must succumb and simply eat it by shoving the entire diameter in one’s mouth to get all the fillings at once. Which is fine, you know. But that was it. It was an amazing sandwich and if nobody else opts to go, I can promise you I’ll be single-handedly holding up this business. Go here. It’s a keeper.

On a side note, I now have official business cards and am leaving them when I go places, like farmers markets and restaurants, so expect to see my calling card when I go out to eat!