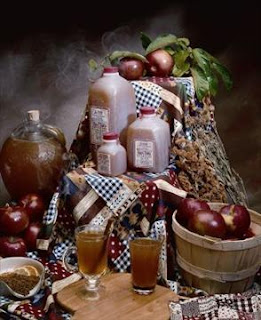 Hello, foodies! I have another snackdown for y’all today, in the spirit of the quickly chilling weather.

Ew, did I really just say y’all? I’m very sorry. Regardless, I have two contenders up for speculation today. Representing the home team is an apple cider from the dining commons, brewed fresh out of Atkins Farms, in Amherst, MA, and representing the “new and fresh-faced” section, in the opposite corner, is the new kid from Naked Juice- Chai Spiced Apple Cider. So, who will win? Will it be the rookie in the game, the Chai cider, or the reigning champion, Atkins Farms?

Atkins Farms’ cider is a really well-crafted drink. It’s full of spices that don’t dominate the apple flavor as a whole and provides a really tasty, not-too-tart flavor. It’s a little sweet, which is a complaint many might have, and if you don’t shake it enough, there’s a little watery flavor at first, but really, I have no complaints to speak of. It’s a delicious cider.

The chai-spiced cider was really disappointing. It didn’t taste like cider at all! It was really just apple juice, a really artificially-flavored apple juice, with cinnamon and some other subtle spices. There’s a nutmeggy aftertaste but I couldn’t taste any of the other flavors typically associated with chai, like masala spices, ginger, or cloves. And it just didn’t have that “fall” (read: unpasteurized!) and raw, delicious taste that regular cider has, that implies that fall is nigh and you should drink cider all the time. I was kind of upset that this was so hyped and yet such a failure in the autumn department. Good cider, regardless of when you drink it, should transport you back to autumn, with falling and changing leaves and smoky smells.