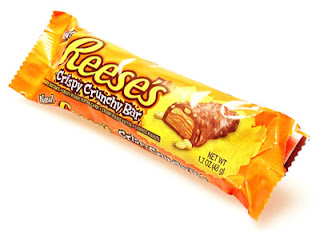 I keep relenting to the allure of the vending machines at school when I need a quick fix, as my school’s rather inconvenient dining hall policy is limited to just that- the dining hall, and sometimes there’s just not enough time. The hassle of being at a massive university, but I suffer through with as much grace as I can, ha ha.

Well, let’s cut to the chase. It disappointed. It’s not that it was bad, it was just misadvertised. I suppose that if this had been called the “Reese’s Mushy Soft Bar,” it would have dissuaded customers, but been honest. There were crunchy moments, like with the peanuts, but when I expected parts to be brittle and crispy, like the peanut butter crisp, they just fell flat under the immense softness of the chocolate and peanut butter layer. I’m sure the elements work wonderfully separately, but together, were just, in the words of the college kids around me, a hot mess.

So yeah. Not a good bar, hefty as it was. I’d have rather had a more peanut butter crisp centric bar, with less chocolate, and maybe a little less peanut butter. But you’ll never hear me say that again!