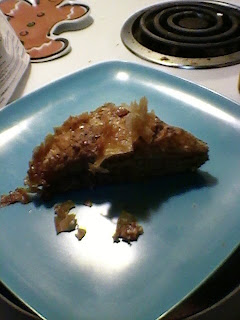 Over the weekend, I consummated and gave birth to a gorgeous and wonderful thing. Together, it was nurtured and drawn out, slowly. It was a slow process. Sometimes, it hurt. Sometimes, we cried. But together, Erik and I created something so incredible, so delicious and brought magic into this world.

That magic was baklava.

So, baklava is this great Turkish dessert with nuts, honey syrup, and phyllo dough. It’s layered with a ton of butter and cinnamon, and then baked in the oven, covered in syrup, and then ‘frigerated and devoured quickly. It looks daunting. It is simple. We felt so accomplished, though, when it was done, and the result was incredible.

And here it is. Make it. Don’t share it. Eat it in the confines of your own home with a good Sauternes and rejoice.

1. Preheat the oven to 350 degrees, and butter up a 9 x 9 pan. The recipe called for a 9 x 13 pan, but we didn’t have one, and it made our baklava have a crispier crust because we had to double up on it. So it’s good!
2. Starting with two sheets of the phyllo dough, fold in half and place in the bottom of the pan. It’s important to keep the dough that you’re not using moist so that it doesn’t crack and dry out.
3. Melt the butter and sprinkle cinnamon into it, and with a pastry or clean paintbrush, spread it onto the phyllo dough layer. Repeat until you have eight pieces, and then spread a layer of almond butter on. Originally, this calls for chopped nuts, but the almond butter is much more moist and is better than anything we could come up with.
4. Layer the dough in sheets of two, nut butter, butter, dough, nut butter, butter, and repeat until the pan is full, like a lasagna, and layer the dough as a final layer, brush with butter and cinnamon, and cut into triangles or diamonds.
5. Pop into the oven for 12-20 minutes, or until golden brown and crispy on top. While this is baking, on the stove, combine the last three ingredients- water, honey, and sugar. Bring to a boil and then reduce and let simmer on the stove until sugar is dissolved and syrup is thickened.
6. As soon as baklava is out, smell it. It will smell amazing. After you’re out of the amazing coma, pour the syrup out of the pan all over the baklava and don’t stop until it’s submerged and floating in it. Pop in the fridge until cool and translucent on the bottom and sticky and amazing.
7. Stick your face in it.

This will drive you insane. We ate this for days. This food is the most romantic, the most obscene, the most loving, cruel, delightful, wonderful, teasing, crazy dessert ever.