Okay, so maybe this one isn’t a dorm food, but then again, my grandmother told me she ate baby food in college and from my research on the harsh streets of rural Amherst, some people still live in the 50’s and still totally do that. Not being one to stoop to Gerber’s obsequious ad campaign, I chose for the manlier, the cheaper, the less branded, the more disgusting… 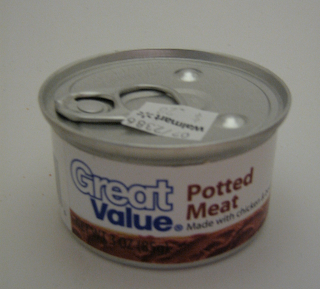 To gear ourselves up for this, Swagger and I did a little research by watching Youtube videos of people eating this live and showing their reactions. Although none made it out alive, at least we got a feel for what would happen. So I edited my living will from the Little Hugs and opened the can. 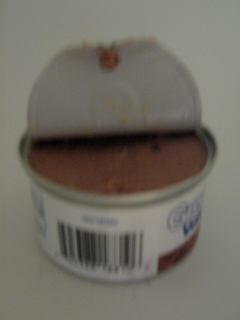 Oh god, it smelled like cat food and leftover Spam. On the Wikipedia article, the fun fact of the day was that different varietals have different ingredients- beef tripe, mechanically separated whatever, the stuff they use to grease Rosie O’Donnell into pants every day. What have you. Ours listed mechanically separated chicken, so I thought we were safe. 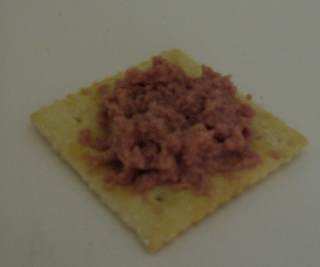 We spread it on a Saltine and made ourselves Sunny D cocktails. And then it was down the hatch for the potted meat. My first impression was that it wasn’t nearly as greasy as the cadre of videos made it sound. The texture wasn’t soft, but something entirely more terrible. It was creamy. It was very wet and very creamy. Meat. Should. Not. Be. Creamy. Even a cheese dog isn’t creamy. This had like, a whipped texture that minced prettily on the Saltine. And then, the taste. It didn’t taste like meat, really, but it did taste like salt. Closest I can liken it to is Spam. That’s a lie, actually, I’ve never had Spam. But it would probably taste like that, and Swagger, who has Spam, says it’s close to Spam.

It’s probably the worst thing you could ever put in your mouth, aside from Rosie O’Donnell’s penis. It’s potted meat. It leaves a greasy residue. And my dorm smells like an animal shelter. 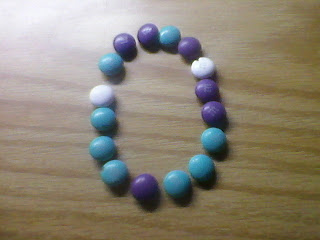