Yesterday, through the help of my boss, Martha Monaghan and the generous UMass Dining, I had the opportunity to take a chocolate-making class with eleven other students and the head pastry chef at UMass, Chef Simon Stevenson.

We got there and went to one of the dining commons’ showrooms, where we got a little briefing about what chocolate is, where it comes from, and how it’s made. Chef Simon passed around a whole dried cocoa bean and a split one, with the seeds rattling around inside. He told us about the five ingredients required to make chocolate- ground cocoa beans, soy lethicin, sugar, chocolate liquor, and cocoa butter, and we went through the process that chocolate goes through to become the form we all know and love.

After getting an education into our beans, ha ha, we went down to the Hampden Bake Shop, where all of UMass’s desserts are made on site, and got a feel for the kitchen and had a chocolate tasting. Chef Simon wanted us to get all of the notes and tones of the chocolate’s flavors in their variations, much like a fine wine. As you can imagine, this was no daunting task for me, having sampled many chocolates and wines, so I knew the drill. 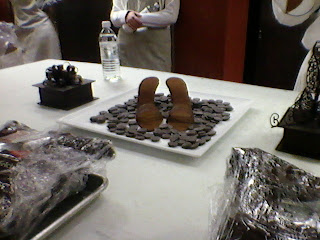 We tried nine different chocolates from Felchlin, starting with cocoa butter. That was waxy and tasted like eating lotion straight out of the bottle, and it had a very slow and fatty melt. The next one was a 100% dark chocolate, and it was very bitter and had a coffee flavor, like eating the straight, dark roast beans, and a nuttiness to it. Not my favorite. After that was a 74% dark, which was preferable to the 100%, and had a more developed chocolate flavor. It wasn’t bitter at all, and although it melted slowly, I found that the finish was nice and long, and very clean, and the bite was similar to the coffee notes in the last one, but richer. The next one we tried was voted the best chocolate in the world, the Grand Cru Maracaibo 65%, which was sweet and dark and smooth, with a long finish and a raisiny aftertaste. It was sweet and the flavors were intense and delicious. 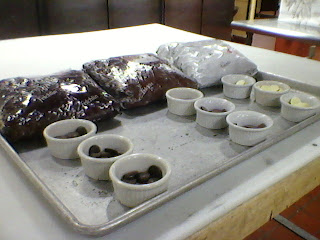 The next few were similar, but I don’t remember their percentages aside from a remarkable 58% dark chocolate that was sweet and caramely and had a great, milky, creamy flavor and a softer crunch to it. That was my favorite out of all of them, because it tasted a lot like a milk chocolate but was still dark, with no milk or milk solids added at all. We tasted an entire spectrum, ending with Felchlin’s milk and white chocolate, which were also sublime. And then we got to the stars of the show- making chocolate!

On the bar today was a chocolate ganache for hand-rolled truffles, chocolate lava cakes, and tuxedo strawberries. We started out by gathering the chocolate for our ganache and boiling the cream, and then gently stirring the two together. 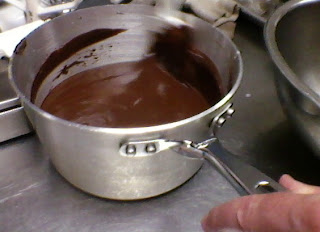 After we whisked the ganache and let it cool, we were shown a table with different flavorings that we could add to our ganache. Once we’d tasted them all, orange and lemon being the general favorite, our group decided that banana would be the best, and once we added it in, boy, was it good! It tasted like chocolate chip banana bread soup.

We set that aside and let it cool and got everything ready to make chocolate lava cakes. Chef Simon explained how, in an industrial kitchen, they use formulas, not recipes, with measurements by weight so everything turns out the same. So we got started with that, whipping sugared egg yolks and eggs into a full, puffy volume and adding our flour and melted butter and chocolate until we had a very mousse-like, fluffy batter. That alone looked good enough to eat, but we had to scoop it into ramekins, add the frozen ganache insert and let them bake. 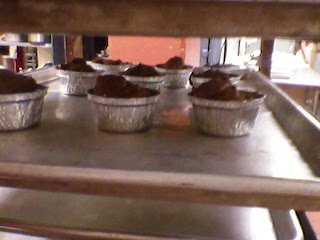 While those were baking, we started on our tuxedo strawberries with a little lesson on writing chocolate. Chef Simon told us about how having a higher concentration of vegetable oil over cocoa butter makes it easier to pipe from a paper cone and write with. He drew us an impressive, loopy alphabet with chocolate and demonstrated a beautiful strawberry, and then we all got to work. 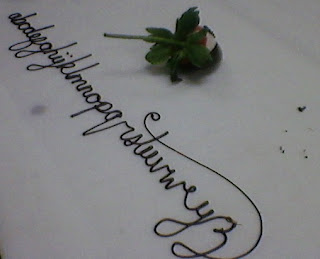 We each got three big, beautiful berries, which we dipped in white chocolate first, and then two sides of dark chocolate for the tuxedo jacket. Once that dried completely, we took the little piping bags and drew on little buttons and bow ties. 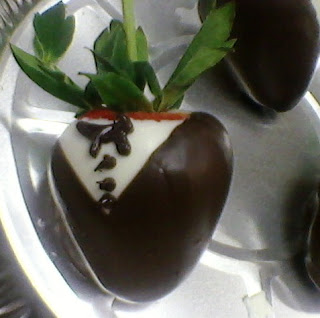 All of a sudden, the lava cakes were done! We took a break to take a taste of our little cakes and see how they came out. They were amazing and hot, fresh from the oven! The tops were crunchy and the inside was fluffy and moist, with a fantastic and light chocolate flavor. They were so fluffy, like little clouds, and the ganache was rich and plentiful. I was so proud of myself for contributing to that success, and we definitely reaped the benefits of our labor! 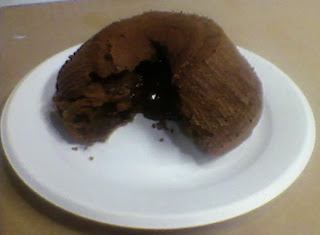 We had to leave the cakes to eat later, because it was time to hand-roll our truffles! We took them out of the freezer, where the ganache rested in squeeze bottles, and we piped the ganache into chocolate shells. They looked like little olives. After piping, we flash froze them and got a tutorial on chocolate tempering and how to fill and dunk the truffles, and then we did that ourselves. My first group member handed me each truffle, and then I got chocolate all over my hands and gave the truffles a bath in melted chocolate, then passed them to my partner, who rolled them in cocoa powder and put them on parchment paper. And then, we ate! 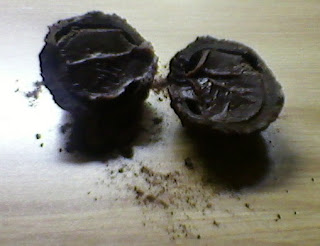 The truffles were elegant, delicious, and looked like the real thing! They were delicious and solidified well. We got 21 to take home. By the time those were done, though, we were out of time and sadly had to leave the beautiful kitchen and beautiful KitchenAid mixers I was drooling over. I have to get myself a tangerine mixer before I hit 21, goddammit! And we left with Felchlin bags, information and goods in hand, as well as two extra chocolate lava cakes, frozen and ready for baking! 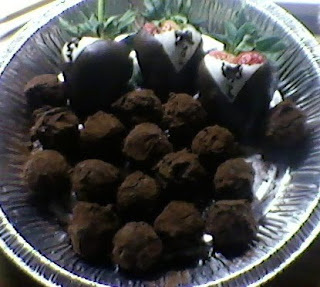 It was probably one of the best experiences I’ve had so far at UMass, and I look forward to trying out the other culinary classes here. Thanks, UMass Dining, Chef Stevens, Jean, and Martha!

Next up on the roster: My first trade show: trials and tribulations!