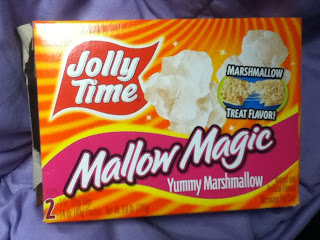 I don’t know why I was so hesitant to try this when it was originally sent to me. The combination of marshmallow cream and popcorn seemed a little too incestuous to me, like Flick, the mildly retarded cousin of Snap, Krackle, and Pop. But I needed to up my ante with my Scattergories game, and the question was “Ways to scare your roommates with weird food.”

After my bawdy experience with Homestyle popcorn, I was ready to try something a little more exotic. After all, as they say in Oklahoma, “once you try marshmallow, you’ll…wear a lot of art deco.” Or something like what. Whatever. This seemed familiar and weird enough for me to enjoy without feeling bad in the morning.

When I opened the bag of popcorn, I expected it to be plain popcorn enhanced by the creamy white sauce I’d slather on top. But this was not so! My sauce was counterattacked by synthetic marshmallow flavor on the popcorn. What’s that, a meta, you say? It was! It was as though Jolly Time was gesturing toward the popcorn, saying, “Yo dawg, I heard you liked marshmallows, so we put marshmallow sauce on marshmallow popcorn so you can marsh while you marsh!”

I marshed all up in that bitch, actually, while watching Teen Mom and looking at micropenises on the internet. The popcorn was delicious without the sauce- it tasted like a satisfying kettle corn, and I was worried that I’d ruin the popcorn by pouring the sauce on. But I forged on, not out of dignity (that had long been sacrificed) but because there is literally no other function for an extra packet of synthetic marshmallow sauce in my life. 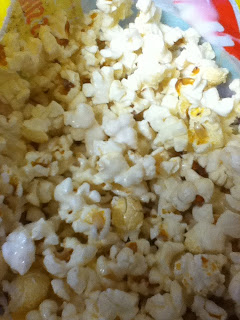 The end result was fantastic. It tasted identical to a Rice Krispie treat but was somehow less sticky. It was obviously a result of voodoo magic, also known as “lots of oil,” but was comfortingly tasty. And by a magical proxy, none of this stuck to my fingers yet adhered perfectly to the popcorn. Fuck you, David Blaine, this shit is REAL!

My only criticism is that not all of the goo adheres to the popcorn, leaving you sadly pawing through the bag after all the goo is happily consumed.

In conclusion, I loved this popcorn. Damn, girl.