Gelato is not something you fuck around with. It’s too creamy and too delicious to overeat. Unfortunately, with the new attraction of all things pseudo-Italian as a result of the upcoming third season of Jersey Shore, we can expect to see new, mass produced gelato flavors from Ben and Jerry’s and Haagen Dasz, like “Snooki S’More Smirnoff” or “Paulie D-ulce de Leche” or, gross- “Ronnie’s ‘Smush Captain Cannoli Crunch.” All of these will be overly oily, with a swirl of real pubic hair and fake tanning oil. Gives you sugar and carbs for GTL! Talenti Gelato does not screw around, though. We recently tried the salted caramel gelato, a new flavor soon to be released in a store near you. 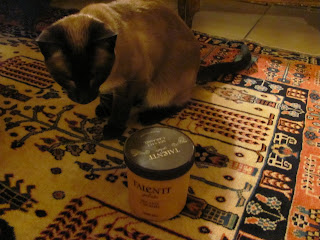 This was so unctuous. And it matched our cat perfectly! Seriously. I once reviewed a dulce de leche caramel sauce, and this was like the frozen, creamy equivalent of it. It perfectly mimicked the flavor of Brach’s Soft Caramels, but better in all possible ways. It was very buttery, but not too sweet, and was infused with sea salt in every bite, giving it a bite and a contrast to cut through the cream. My favorite part about this gelato was that it was not only salted caramel, but had salted caramel truffles studded throughout the pint. That’s a perfect Yo Dawg if I’ve ever heard one. The little truffles were cold, but not frozen through, and had gooey liquid caramel inside. What I really liked about these was that they weren’t plain truffles, but were also clearly salted to enhance the experience on a whole other level. The chocolate was smooth and creamy. My only complaint was that the truffles were very unevenly dispersed. In two half cup servings, one had one truffle and another had seven. It’s not fair, especially when they’re so delicious. 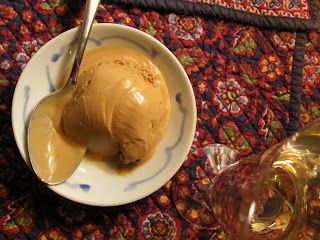 That being said, I’d stock up on this the next time I was in the supermarket. It’s rich enough to savor and prevent overconsuming, and sophisticated enough to serve as a dessert to friends or someone you want to impress. Keepitcoming’s birthday is coming up and I’m thinking this would go well with the salted caramel frosted cake I’m making her. 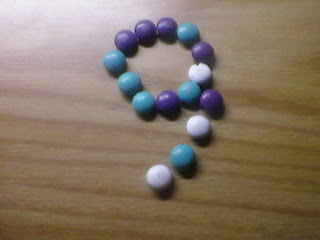