Another rearrangement. Spicy Week 2011 isn’t out of order- it’s SPECIAL. And also entirely my fault. But tonight I’m featuring, as Always Sunny in Philadelphia would say, the wild card. Or wild cards, in this case. This selection was a bunch of hot sauces or spreads that were too interesting to lump into one category. I wanted to feature them together instead of just cramming them in somewhere they wouldn’t stand out- it would be like drinking an ’89 Clinet in between two other big players- a Beaucastel or a Certan. That way, I’d be able to enjoy and savor each one. 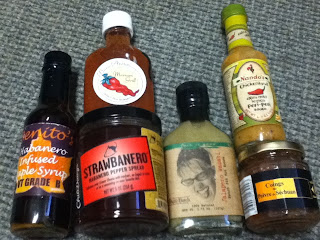 It was indeed, a motley crue of sauces. All different peppers, syrups, sauces, jellies. But quite tasty across the board. We started on a pretty dismal note. The first sauce, from Pain is Good, was a jalapeno wasabi sauce. The packaging was unique. All across the board, PiG has shown us a brown bag, flask-shaped, sort of grungy style that I rather like. It’s the same here. 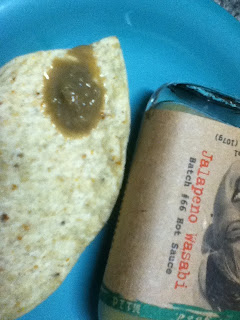 And the sauce looked promising, but turned out to be sour from the start, with a funky mouthfeel and aftertaste. It was probably all the worst of both jalapeno and wasabi, and would doubtedly go well and overpower any food it was paired with. 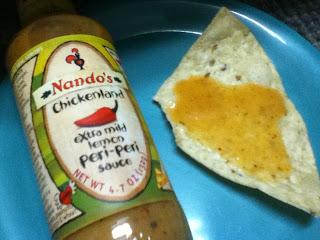 The next sauce was from Nando’s Peri-Peri, their extra mild lemon Peri-Peri sauce. Having enjoyed their hot sauce and cooking sauce in the past, I was prepared to put this on my chips and savor it. Even if you’re from an area with little to no good Mexican, who hasn’t enjoyed the combination of citrus and salt? I love squeezing limes on my nachos. This, however, was pretty disgusting. It was very, very bitter with too much lemon. Ironically, the citrus made the “extra mild” sauce a little bit hot from the acidic burn. It had a soapiness to it and a smell I couldn’t quite distinguish. After passing it to my roommates, we later determined that it smelled exactly like nail polish remover and an asston of garlic. It’s inedible and I wouldn’t put this on anything for fear of being suspected of poisoning. 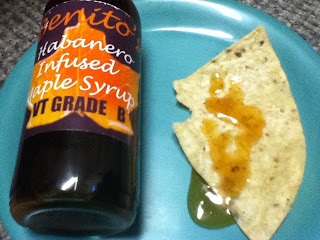 Luckily, it went up from there. After that, I tried Benito’s habanero maple syrup. I was really excited when this came in, as I’d been envisioning a cold winter breakfast of jalapeno cornmeal pancakes with syrup, and this made it sound even more delectable. I figured that at its worst, it could be thick and grainy and overly spicy. But it was perfect. Honestly, one of the tastiest syrups I’ve had, despite being an outlier. The first great thing was that it had a natural maple syrup base and flowed easily and smoothly. I’d have guzzled this plain, but it got even better and it came with a burn! A lingering heat that didn’t overwhelm the sugar, but would wake you up in the morning for sure. 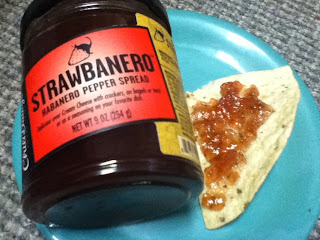 Then came the jams. Honestly, I’m dying to use these jams in a jalapeno popper. Or maybe a sweet banana pepper popper. I think they’d go really well with cream cheese. This is the Chili Dawg’s Strawbanero. I think the names are a little contradictory, because I expected something chili-related, but jam is delicious. The strawberry flavor was intense and seedy, with a little gumminess. The heat was present, and definitely in with the jam, but was inevitably not very spicy and died out quickly. Overall, kind of disappointing for a spicy product, but decent as a jam. 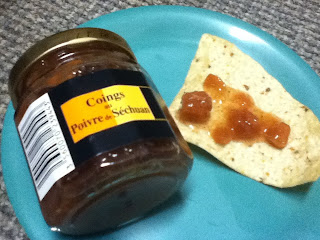 This next jam was one of four my father brought me from France, all themed with strange peppers and fruits native to Europe. This is supposedly a coing and Szechuan pepper jam. I had no idea as to what a coing was, but Wikipedia France told me it was an extremely aromatic, large fruit, with an acidic flavor and a pear-like shape. When I tasted it, its softness reminded me of a plum and it had an appley, slightly citrus flavor. I’d definitely be interested in trying a fresh one. The peppers didn’t show through as a spice, but more as an herbal note. An intense herbal note. More like tea than spice, or pumpkin pie spice, but tasted pretty high end. 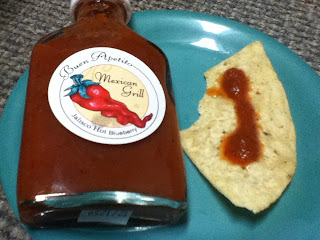 The last sauce I tried was probably the most hot saucey of tonight’s bunch, a jalisco pepper hot blueberry sauce from Buen Apetito. I found that it had a nice heat that really lingered- for over two minutes, but otherwise could have fit in with the regular hot sauces. It didn’t remind me of a blueberry hot sauce aside from a strange pulpiness to the texture. But what I was really looking for, the berries, was lost in the heat. 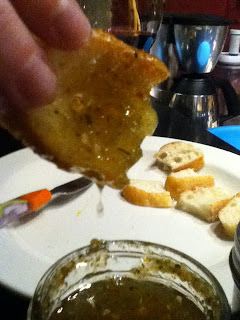 This is another jam that Keepitcoming tried as a gift from Dr. D back in November. It’s a saucy spicy jalapeno pepper jam grown by one of Dr. D’s friends and made into jam by her students. Her company is called We Be Jammin’ and makes excellent jam. This particular pepper was looser than most jams, but was very, very spicy and soaked into the toast and other breads we used, with a sweet brown sugar flavor and a substantial spice.

Clearly, Benito’s syrup was the tastiest unique product I tried tonight. I feel like it’s both versatile and exciting and my only qualm is that it comes in a tiny bottle when it seems as though it could be useful for so many foods. This is also the case with We Be Jammin’- another condiment that has that universal usage. Both sauces were well balanced with spice and sweet, and weren’t overwhelming in one way or another. Excellent!