How could I not end normal bloggery on an awesome note? The second to last post before Healthy Month starts. I realized something a little disturbing when I decided to feature this sandwich. I’ve extolled its virtues. I’ve bonded over it. While I can’t say I’m the Don Gorske of my generation, I’d be honored to be known as the unofficial enthusiastic spokesperson for this sandwich. The reason is simple- for as many exotic and fine foods as I have consumed, as many expensive and gourmet dishes gone down my gullet, the McGriddle remains firm on my list of the best foods I have ever eaten. 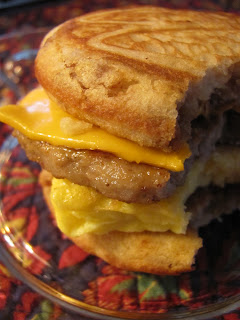 Go ahead and laugh. But then tell me this. Have you ever seen anything like it? Combining sweet and savory breakfast foods seems ingenious, even a little silly. Of course people have thought of it before. It has been often imitated- Jimmy D’s francophone carbohydrate based Griddlers, a monstrosity that sounds like an end bin Batman villain, Dunkin’ Donuts Waffle Breakfast Sandwich– but never duplicated. All have fallen in the wake of the Grid. Less a hastily combined melange of breakfast foods than a carefully proportioned chemistry set, Keepitcoming took a bite (three bites) and immediately picked up on how engineered the whole thing seemed. 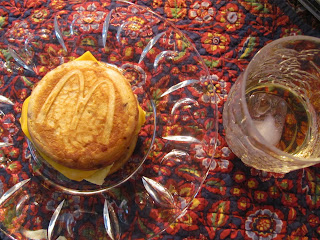 And engineered it is, with its petri-dish compact form. The concept of fork-free brunchery seems to have an air of mad science lab about it, but damn, is it good. While one can argue that, in your pact with Ronald, you sell your soul and greaseless fingers for a sandwich with built-in syrup, but it is a very fair trade. I love it because it’s almost retardedly simple, yet perfectly executed in an unnatural way. Tell me of another fast food item that goes well with a finger of 10 year old Laphroaig. The egg sheet crumbles like no egg should ever crumble, and the sausage is glisteningly greasy and spicy. The cheese binds it all together with a gooey, creamy saltiness, and the pancakes deliver an outer crunch and a doughy midsection (in more ways than one) with a sweet syrupy flavor that is surprisingly understated. The only way to experience this with any more enjoyment is to slip a hash brown into the sandwich, giving you a little more grease, a little more crunch, and fleeting moments of enjoyment that quickly segue into delicious, delicious guilt. 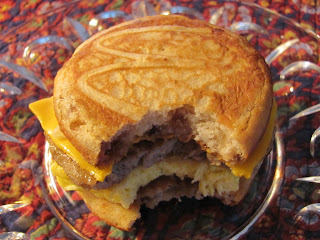 Is it absurdly indulgent? Yes. Is it as bad as most breakfasts in a three dollar, fast food range? It’s really not. For an adult eating 2,000 calories a day, eating a 400-500 calorie breakfast is not the end of the world. Compare that to the Dunkin’ Donuts Maple Breakfast Sandwich, with 720 calories, and the Hardee’s Loaded Breakfast Burrito at 780 calories and the McGriddle seems like a petty offense. Even the “sit down” equivalent to this, the Big Deluxe Breakfast, packs as much calories as two and a half of these. Haters can hate all they want, but this baby is here to stay. In my belly. 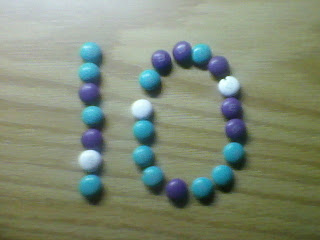