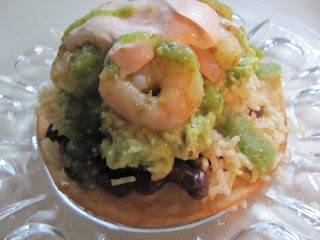 Shrimp taco salad is so easy to prepare and so hard to fuck up. This was a particularly zesty recipe, with lime zested beans, chili-garlic rice, guacamole, paprika sour cream, and plenty of shrimp and salsa verde on top. Good Mexican food is so damned filling and so cheap. It might be one of the most satisfying cuisines I can cook. 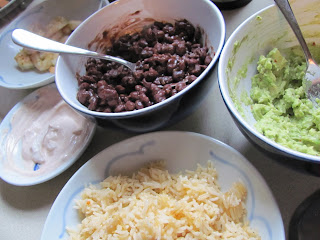 We ate this salad after a day of running errands and it was honestly as good as any I’ve had in a restaurant. Fairly simple, too, with a layer of lime black beans, chili garlic rice, guacamole, paprika sour cream, and salsa verde marinated grilled shrimp with plenty of salsa slathered on top. It was only until later when I realized that not only had I forgotten the cheese, but that we didn’t even need it in the first place.It’s a recipe that orchestrates itself easily if you tackle the time-consuming elements, like the rice and beans, first and then prepare the cold toppings while those are cooking. 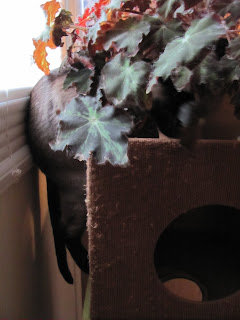 In conclusion, here is our cat. She tried to jump on her cat tower while a potted plant was resting on top, miscalculated the distance, and got wedged in between the window and the cube because of her exceptionally rubenesque rear end. We laughed and took photos and posted them to PETA’s Myspace and then we let her down. All was well and she ate shrimp off the counter.