Never before have I visited such a grossly overestimated restaurant. How odd to find a place that is resting on its laurels one week after being reviewed in the New York Times. In their fawning October 2010 praise-fest of Arturo Franco-Camacho’s third lackluster attempt at an eatery, The Suburban in Branford, CT, Connecticut Magazine bills it as “extraordinary,” where the “genius” is in the details. Unfortunately, I’m going to take a note from the misquoted Mies van der Rohe and say that the devil, and not the genius, is in the details instead. A recent visit to The Suburban proved this to be correct when my dining companion and I encountered an abundance of smarminess and a dearth of creativity. 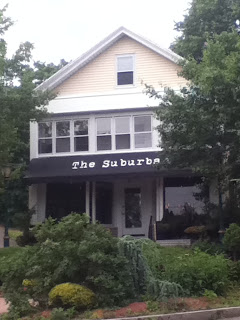 The Suburban starts with deception, serves up deception, and ends with a big, fat load of deception on your plate. The sample daily menu is what friends of the franchise in obviously high places and deluded Roomba diehards call unique and inspired, but it is unfortunately a come-hither concealing a rather dull actual daily menu. The sample menu on the site looked fantastic and varied with small plates like Moroccan shrimp with feta, fennel, and orange segments, and blueberry ginger duck breast with brioche corn pudding serving as large plates. My only original trepidation was that with a large array of food spanning multiple continents, plus two other restaurant ventures on the way, the Franco-Camachos would be spreading themselves too thinly. 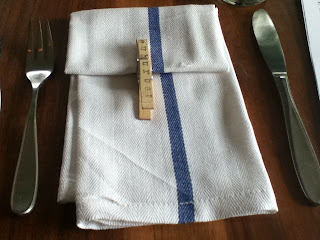 It turns out that the “daily” menu is simply a matter of cutting corners by pairing dull, typical proteins with dull, typical sauces. After being seated away from the strangely bisected bar area, which looks reminiscent of an old-timey candy store, and in the wood-paneled hipster hall, we were seated near a creepy Duggar family-esque “communal” table, the room’s focal point. We were given menus and a clothespin reminiscent of Thomas Keller’s French Laundry keepsake. This is no Thomas Keller establishment. It is a common experience to go to a restaurant and be satisfied, though not wowed by the dishes. It is regrettable to go to a restaurant that prides itself on its innovation and find the small plates and large plates so damningly boring that you have no inclination to order them and prefer to vapidly nosh on side dishes. Unfortunately, that’s exactly what we did. The $26 charcuterie and cheese plate was out of the question, as we had no desire to pay that kind of money and risk receiving skimpy portions of meat and cheese, none of which were prepared in-house. We shared an order of three “snacks” for $16: Deviled eggs with olive and fig tapenade, Catalan gazpacho with lobster croutons, and chicken liver mousse with a raspberry and parsley gastrique, plus a side of pommes frites, just for the hell of it. We also ordered two of their specialty cocktails of the evening, a pineapple mint mojito and a strawberry chile margarita. 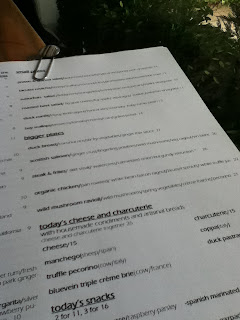 The wine list is unreasonably off the charts. For starters, their glass prices are incredibly high, with $9 for a glass of 2009 Gazela vinho verde, a wine that can be bought in stores for $11 per bottle. Here, it is $30. Even in trendy New York establishments, I can’t think of a time when I was charged a restaurant markup of over 45% for wine, and good wine at that. So $10 for cocktails seemed like the better route, though not ideal. My cocktail was visually appealing, and touted as containing strawberry puree, Cointreau, silver tequila, and fresh jalapenos. I opted against a salt rim as I did not want the savory flavors to be too overwhelming. However, there was no trace of jalapenos in either a physical or flavorful form, and the strawberry puree was a mere afterthought on the back of my palate. All I tasted was my least favorite part of a cocktail- alcohol. Yogurty, thick, burning tequila and not much else. The drink was bitter and needed sugar, agave nectar, anything to save it from pure boredom. I stopped drinking halfway through because I was buzzed and tired of its one-noted flavor. 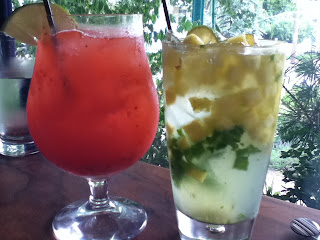 My companion’s drink was far tastier, with little nibbler-sized chunks of fresh pineapple suspended in the clear drink. It was palatable and fruity, with distinct ginger and mint flavors thanks to the quality of Foxon Park’s damned good ginger ale, and the flavors were cohesive and well-paired. The only problem was that this seemed to be a completely virgin drink. She experienced no alcohol buzz compared to my loud, brutish one, and found it a little strange that the flavors completely concealed the rum, leading us to wonder if there was more than a thimble full of alcohol in it at all. 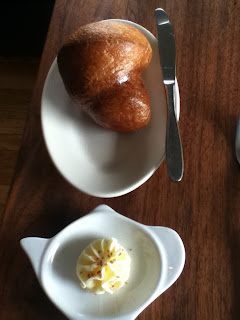 Our server came by multiple times to repeatedly ask us, like an automated phone operator, if we wanted more than just snacks. She begrudgingly brought us delicious steaming popovers in a basket after we asked, but did not set the basket down and instead served us two and walked away. I felt as though if I’d asked for more, I’d have been reproached like a child. Instead, I savored mine, a fluffy, crispy delight resembling an edible balloon. Served with butter conservatively dusted with crunchy crystals of Hawaiian pink salt, I’d have been happy to eat this all night. These are complimentary, but handed out more conservatively than food in the Great Depression breadlines. 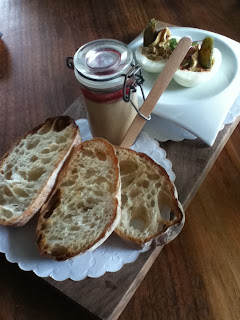 Our first two snacks came to the table in a beautiful presentation that delicately danced the line between rustic and fancy. The chicken liver mousse, served in a miniature mason jar, with a clear stripe of raspberry parsley gastrique on top, was the best of our selections. The raspberry compote provided a fresh and jammy contrast to the rich flavor of the mousse below. The mousse was plentiful, leaving about half the container’s worth after the bread was consumed. We had to ask for more bread to finish it.

However, the deviled eggs were pretty disappointing. In the aforementioned Connecticut Magazine article, I was looking forward to the “twinning” of flavors in deviled eggs served two ways, but I found that these eggs were both prepared the same way, with the filling dominated by a spicy mustard flavor and dotted with tiny kalamata olive specks. They were good deviled eggs, but this preparation was significantly dumbed-down from what was lauded in that and several other reviews. With this in mind, the eggs came across as sassless, neutered bites. A mere hint of olive was left at the end of the egg, and the fig had since fled the restaurant to seek greener pastures at Le Petit Cafe down the street. 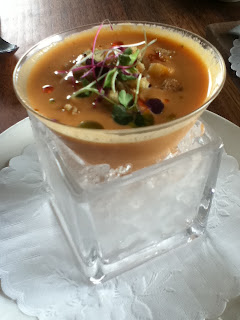 After the mousse and eggs were brought out, the gazpacho was presented in a container resembling the top half of a martini glass set in a dish of ice. The presentation looked more appropriate for caviar, and came across a little twee for gazpacho. The soup was topped with microgreens and small chunks of lobster. No idea where the croutons came in. The soup was made well with a smooth flavor but was wholly unremarkable in any aspect other than its splashy presentation. 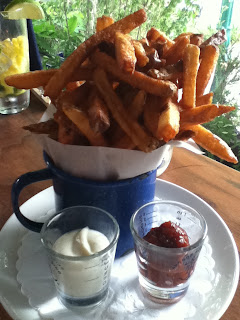 Our server came back bearing French fries and again asked us if we were interested in rethinking our position on small and large plates. Jesus, it was more complicated than buying a timeshare. No, we were not interested. She put down our fries in a huff and scooted out. Pommes frites were made to counteract the fatty richness of a steak or protein with a pillowy, starchy carbohydrate. Five dollars gets you a small bucket of conventional, thin French fries and two housemade condiments. The fries were stacked precariously high, like edible Jenga blocks, and inevitably fell on the table when I tried to release them from their greasy prison. I was unimpressed, as these fries looked like the smaller clone of those at Local Burger, which are tastier and come in three times the quantity for half the price. The condiments were piquant and unique, with a ketchup similar to Sir Kensington’s and a tasty, herbed malt vinegar mayonnaise. These were tasty, but served up in shot glasses with the ounces marked clearly. The condiments did not go above the one ounce mark, which looked rationed and cheap.
At this point, I should mention that our server had completely given up on us. This forfeit, coming from someone who forgot the word for plantains while dutifully intoning the nightly special, was pretty ballsy. The remainder of the dinner was spent trying to usher us out as quickly as possible, asking two more times if we wanted entrees despite our obvious irritation and refusal, and going as far as to give us our check while we were still eating after we had mentioned wanting dessert. This was unacceptable and rude, and if she was trained to rush dissatisfied customers out to make room for those who care to go whole hog, clearly The Suburban is relying on the good graces of those who are susceptible to pretension.
There are plenty of restaurants where I am happy to spend upwards of $200 with a generous tip, because their food is sublime and their service impeccable. I had hoped that The Suburban would become part of that list, but no such luck. I feel that, with the unprofessional service, poor attention to detail, tense environment, and lackluster menu here, it would be akin to going back to an abusive partner again and again and being continually disappointed and upset with what they had to offer. In spite of their high ratings from multiple reputable news agencies, I observed that the staff at The Suburban were rude and unaccommodating to other customers and didn’t seem to be able to fill many seats. If I were to go here again and drop my hard-earned money, it would be only my own fault for succumbing to their smoke and mirrors again. 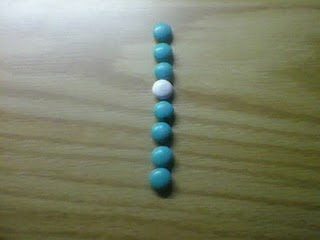 6 thoughts on “The Suburban, Branford, CT”