…need only include sunny, windy weather and a hot dog a la Blackie’s of Cheshire. As you know, I hail from what ought to be officially known as the hot dog stand capital of the United States- Connecticut. But then we’d have the hamburger (Louis’ Lunch) as well as the hot dog and all the other states would be jealous. Admit it, Idaho. 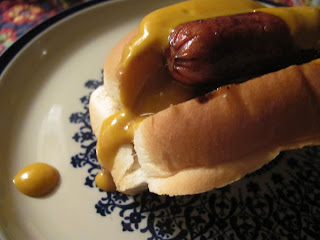 I don’t boil my dogs. I prefer them cremated to a snappy, crisp finish and slathered in spicy mustard on a steamed bun. 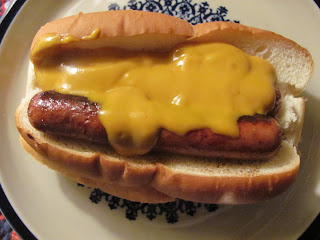 One can never have too much mustard. And yes, there’s another link hiding under there. Oddly enough, it all comes out to be perfectly proportioned. 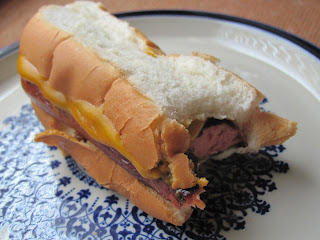 And as much as I’ve been harping nutritional facts lately, this is a hot dog that has all the frippery of appearing indulgent, but with a caloric count that really won’t make a dent in your diet. After slaving the day away, I’ve been coming home and playing around with my meat. Meat combinations, that is, and found this one to be the tastiest and the least caloric. I used chicken links instead of beef hot dogs and, because I wanted two hot dogs, shaved a bun off by just stacking them both together. I think it had a better flavor because when I had two dogs in two buns the night before, most of the flavors were lost in the squishy sweetness of the split New England bun. The first night I grilled up some dogs (I’ve been eating these for a few days now. I just can’t get enough of them when the weather is nice) I toasted the buns as well, but found that with the charred, salty flavor of the meat, the buttered finish on the buns was too overwhelming. 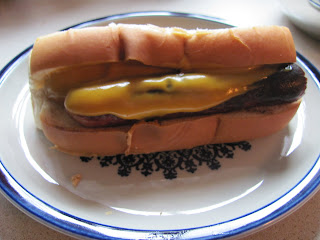 So, with my variables accounted for and my condiments carefully smeared on, I believe I have created a hot dog worthy of a place on the ultimate list of Connecticut pups. The total calorie count for two chicken franks, one steamed New England split bun, two tablespoons of hot mustard, and a bit of oil or butter for cooking came out to 350 calories (and this is a filling dog) and around 13 grams of fat. I’m sure even that could be reduced by finding a fat-free hot dog or grilling in margarine or a noncaloric cooking spray. I just happen to like the taste of butter. So simple, and yet, so satisfying.

One thought on “Simple pleasures on a summer day…”