I always consider it a serendipitous stroke of fate when I’m able to purchase something I love for an incredibly cheap price. I’m often able to do so at TJ Maxx, which, despite its selection of heinously unfortunate women’s wear, has quite a few end-bin and discontinued varieties of organic food and candy. None of my visits have carried the bounty of last year’s Sharkies attack, where I came across four boxes for $2 apiece, but I have picked up a few odds and ends on my visits. Cheap organic saffron for $7 for a gram, sauces and dips from Robert Rothschild, and tiny glass bottles of Voss have only been a few bucks spent to get me closer to my goal of ULTIMATE SUDDEN DEATH PRETENSION YUPPY ATTACK, and today’s find was a perfect example of that.

YummyEarth’s core philosophy is eliminating “yucky chemical colors and artificial flavors- for the kids.” Well, call me Chad and stick me in a customized Ralph Lauren visor and pair of deck shoes. That reeks of an annoyingly self-righteous arrogance almost as much as a light misting of Lacoste Essential on your latest linen Brioni blazer. This flavor seemed unique enough to warrant a spot on the Foodette roster, featuring two hot lollipop flavors for any palate. 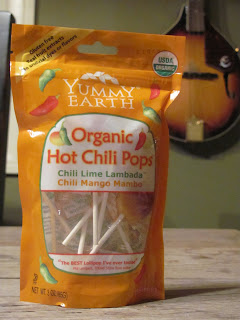 The first thing that struck us about these was how completely inappropriate for children these were. The packaging was brightly colored, as were the lollipops, but the flavor was quite spicy and neutrally sweet. The heat was hotter than Tabasco hot sauce, but not as hot as the ogling sesh Roger Mooking was giving Aaron Sanchez’s wrapped burrito on last night’s episode of Meat- er, Heat Seekers. (“My identity is wrapped inside that little taco.” True quote.) Yowza, I felt like I was watching the Oxygen channel, but I digress. This is not a flavor a child would enjoy, but comes wrapped in a package and in a form that would attract and eventually traumatize a child. It’s a breach of trust of the fundamental appeal of candy is for a kid. Again, just like Heat Seekers. I’m a pro at this. Not that I care, but it’s like wrapping a small loaded handgun in a limited-edition strawberry scented Squinkles package and a $500 gift card to a candy store taped on top. 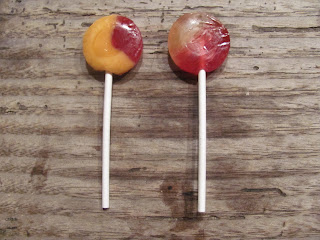 The Chili Lime Lambada (a traditional South American dance, obvs) was the better paired flavor of the two. I was expecting a slightly more rustic, rugged texture, but the consistency had a glassy smoothness with no pits or bubbles. The lime flavor was sweet, with a sterile flavor lacking in acidity. Very similar to the slightly overripe flavor of Rose’s Lime Juice. It blended well with the chili, but was eventually overwhelmed by the sweet sting of the spices later on. Despite only having 22 calories, I lost interest after a few licks and wasn’t compelled to consume the other 20 I’d left behind. Neither of us found that the Chili Mango Mambo was a very convincing incarnation of the fleshiness and floral, acidic tang of mango. This was also overwhelmed by the chili, but tasted alone, offered a sweet, creamy flavor that was tasty, but in no way resembling the fruit it intended to emulate. Mango is a very difficult flavor to pin down in a candy or drink without using the actual nectar, and even using that in the lollipop couldn’t save it from the heat of the pepper. It was less spiked so much as it was slathered, and unfortunately turned us off both lollipops well before they were done. 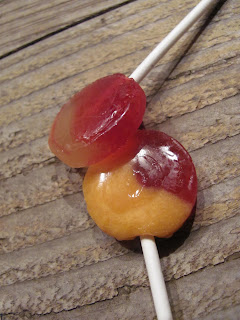 Even the weird-assness of the flavors wasn’t enough to convince me to eat more of these. Since I’d bought them at $1.50 for fifteen, I wasn’t too upset, but if I’d paid full price for them, I may have been slightly peeved. These were just too average and mismatched to elicit any emotion from either of us, other than vague disappointment at the unusually strong heat of the chili peppers. It is also worth noting that YummyEarth tells us that these are “only in limited distribution in places like Miami, Los Angeles, South Texas, and Zingerman’s Deli in Michigan.” Places with primarily urban demographics, and a deli with customers who wish they lived in the romanticized ideal of an urban area. Nevertheless, these found their way to the frigid shopping plazas of Connecticut, created by yuppies, abandoned by real Mexican flavor aficionados and passed on to the yuppies. And the circle of life goes on. 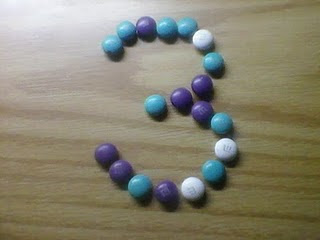