“Hi, uh, what kind of pies do you have?”
“We have apple and cherry, but I really don’t like cherry.”
“Okay, do you have the strawberry pie?” 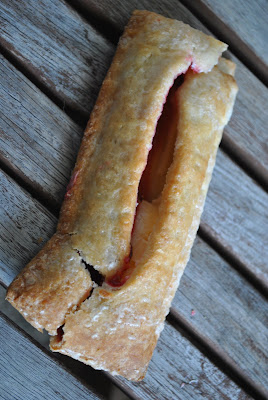 “The strawberry creme pie? Yeah, we have that.”
“I’ll take one of those.” 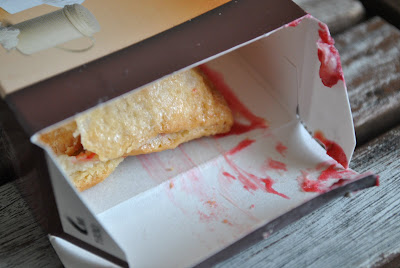 It was like walking into a speakeasy. No advertisements, no branded packaging, and no overt mentioning of the new strawberry creme pie existed at this McDonald’s. While I’d been told in advance that it was being sold in my area, proving that we are yet again another awesome pie test market, it was still awfully strange that none of the employees seemed to want to tout its springy goodness. 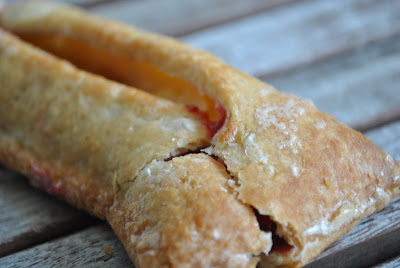 However, after opening the box, I began to formulate an idea as to why that was. This particular pie was crushed and battered beyond all belief, leaking its red, gelatinous contents out of the box. The underside appeared to have been broken and restitched together with a hasty application of pie glue and the filling sank to the bottom, the top crust bowed and fractured. What was advertised as a sugar-dusted coating was a glaze-drowned layer on this one. However, as I know from many fast food forays before this one, sometimes the ugliest ducklings yield the tastiest meat. 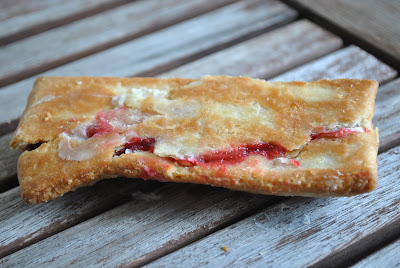 In this case, the pie crust was chewy, but appropriately sweet and heavily improved with the glaze on top. While the strawberry manifested chiefly in the form of pie filling goo with no discernible texture or fruit to speak of, it had a fresh, tangy flavor perfectly complimenting the sunny weather outside. The creme was where I ran into some issues. It wasn’t creamy in the way that I expected it to be, with a pudding-like, runny texture, and instead was crumbly, dry, and baked like a custard. This definitely leeched away some of the more summery implications of the dessert and relegated it more toward day-old baked good central. However, the flavor was fresh and vanilla heavy, so the texture felt like less of an issue in comparison. 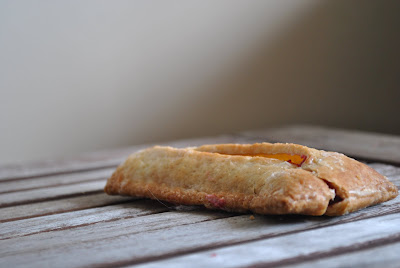 Overall, I’m very impressed that McDonald’s is offering seasonal pie flavors for our vacillating New England weather. Color me jaded, but apple just doesn’t reek of spring or summer to me. I liked seeing s’mores in the summer and pumpkin in the winter, and having strawberry creme in the spring is a pleasant way to welcome in the season. While this sort of missed the mark in the texture department, I was pleased enough with it to eat the entire thing and share a little with Miss Love. 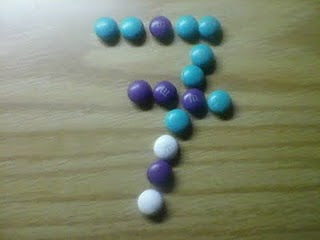