On their website, Domino’s revealed the nation-wide introduction of its gluten-free crust. However, due to the large scale of its operation, the crust cannot officially be endorsed to celiac sufferers due to the potential for cross-contamination. An interesting point that we’ll later be exploring as we taste the pizza (also, only available in a 10-inch small regular pizza, artisan varieties excluded) and let you know our take on it. 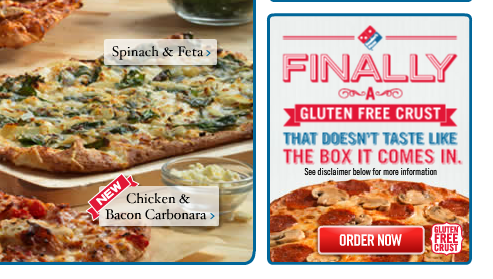 Check out the press release! Also gotta love the tagline- “gluten-free pizza that doesn’t taste like the box it came in.” We’ll see about that, Domino’s!