Unless you’re the child of megalomaniac supervillains, chances are, you were probably taught to not be an infuriating asshat from a young age. Maybe your parents told you to quit stabbing your neighbor’s pets, or to help our around the house more. And if I’m ever a parent, my list will definitely include those, (do you know how damned stubborn terrier blood stains are?) but my ultimate goal will be to prevent said anonymous children from ever indulging in a self-indulgent, masturbatory fantasy like Kickstarter. 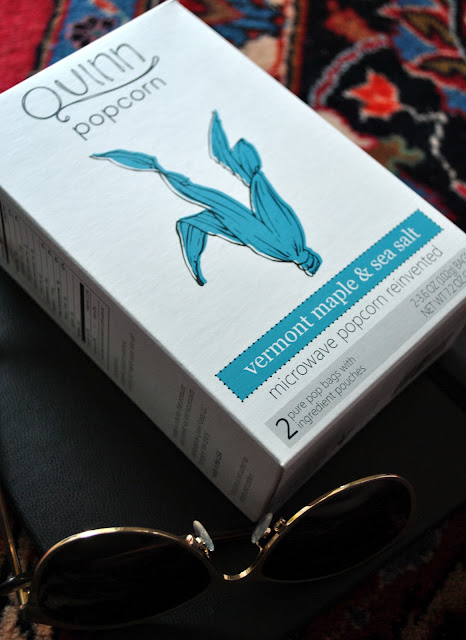 Call me bitter, but in the past year, I’ve seen a lot of things, man. I’ve seen a lot of things come of Kickstarter. I lost a good friend, good kid, to a band of Westchester-born roving accordian-playing lunatics singing bluegrass. Another friend? Let’s just say that guerilla knitting landed her 25 to life in the clink. So when I saw this Kickstarter-spawned popcorn prominently displayed in my local organic co-op next to quinoa bites and cruelty-free banjos for a mere $6.05, it was essential that I pick up a box. Ladies and gentlemen, I have won the internet. I have found what I believe to be the worst, most simpering product in the world. Quinn Popcorn, featured here in Vermont maple, grey sea salt, and shame, has met its pretentious match. 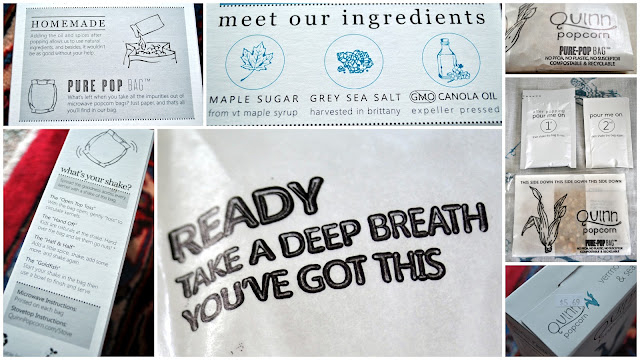 Your six dollars, which, I might remind you, could potentially purchase you anywhere between 1.5-1.75 gallons of gas, buys you two small bags of popcorn. Which you have to pop yourself. With a cutesy, minimal label reminiscent of craft fairs, handpainted jugs, and parents who want to embrace “the simple life” by forcing their children into hemp clothes so they can Instagram it later. Oy. Did I mention that the aforementioned flavoring also has to be added on its own after you shake a giant bag filled with popped corn and oil? And tossed together with a lackluster jingle so the toppings are evenly distributed? The price tag is like a giant middle finger on top of all that, complete with an idea tax for being the first to come up with such an audaciously shitty idea. 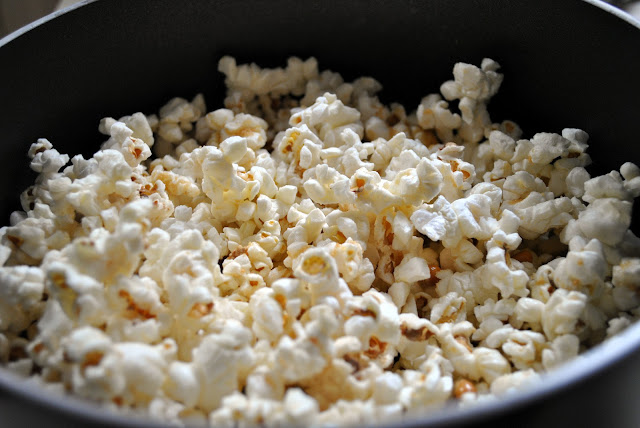 As difficult as this may sound, the inside of the box is almost worse than the outside. The bags are covered with keyword spam that lovingly massages the reader’s balls and ego with promises of no GMO’s, no artificial flavoring, and no susceptor, which is a bummer because I hear Captain Planet was looking for a new sidekick. Susceptor! At my side! The box informs you that the toppings are packaged separately because “it’s just not as good without your help,” despite forgetting that you “helped” by buying the damned thing at the store. Now they want to put you to work, too. 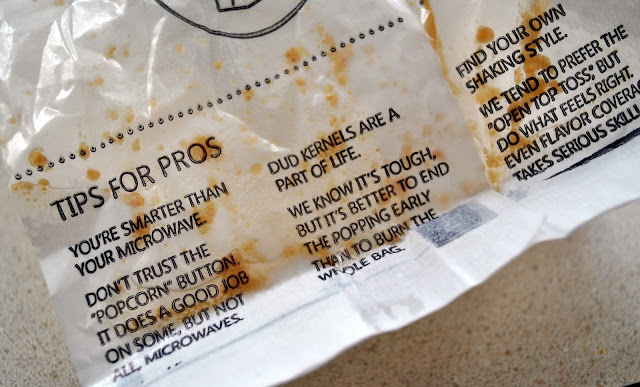 Popping the corn was easy, and while I was waiting I happened to glance at the “Pro Tips” on the other bag and happened to notice that-Shut up! Shut up! Just shut the fuck up, Quinn! I am an adult with a life and an income and a partner and bills. Do not congratulate me for popping my own popcorn. Do not inform me that dud kernels are a “fact of life,” you Granola University-educated douche. 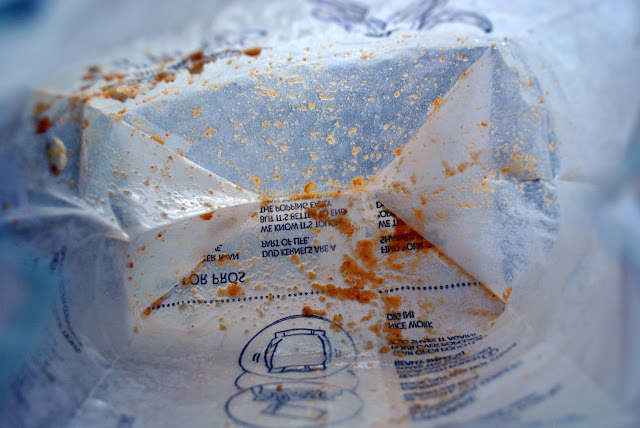 These flavorless tidbits are ironically the boldest aspect of the popcorn. 80% of the kernels are left unaltered, despite a vigorous shaking (I use the “3%” method, meaning that if more than 3% of the kernels are unpopped, I dropkick the bag into the nearest trash can) and the remaining coated kernels are soggy and sweet. So far, this is underperforming the popcorn from Big Y that you can use as beanbag stuffing. 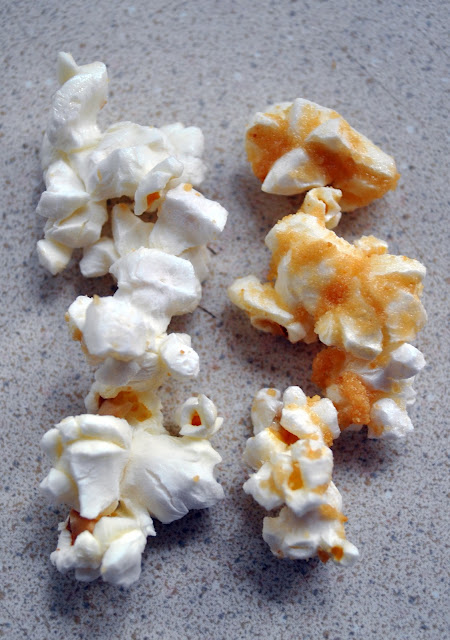 I enjoyed the flavor until about ten minutes after eating a few handfuls. The maple and salt was flavorful in the pieces with powder on them, despite my inability to orally recognize their origins. However, there’s a strange, filmy cardboard aftertaste, slightly sour and off in flavor, after eating the kernels. That’s what I find the most strange as the ingredient list is pretty transparent. Not knowing where that flavor is coming from is even more disturbing than eating Big Popcorn’s latest soma snack. 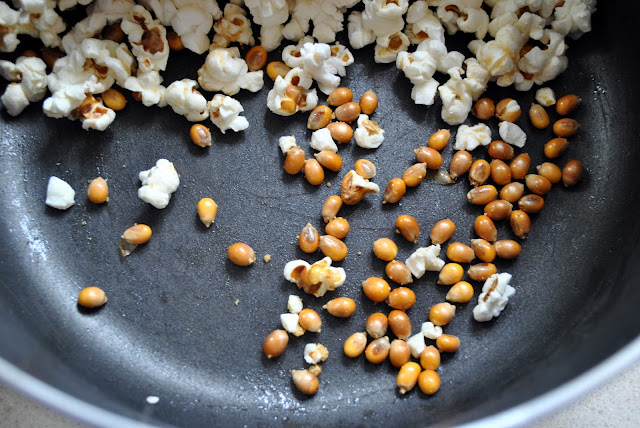 I wanted to love this, because in some aspects, I’m sure I’m as pompous of a fuck as Quinn Popcorn is. I’ve knowingly purchased a handcrafted leather wine pannier for my now-purloined vintage motorbike. I’m the one who wanted to name our new kitten “Patina,” for Christ’s sake. So, Quinn, you win. You’ve successfully created an edible Anthropologie store and have officially outpretensioned me and not only do I hate you for it, I implore you to recognize that you cannot rise from this. Please, go back to Jiffy Pop and save the world a bad taste in its collective mouths.