People love posts about grocery runs to Trader Joe’s. They like to read about peoples’ foreign shopping sprees. Hell, they even tolerate watching asinine haul videos that look as if they were scripted by a bored Uwe Boll during a scene phase. So, in that vein, I thought it would be fun to showcase food from one of the most amazing discount grocery stores the world has ever seen. No pressure, Picard, no pressure. Yes, Picard, no relation to the Jean-Luc franchise, is a store that specializes in one thing and one thing only: frozen food. And they have freaking everything. Frozen cubes of ready-made sauces. Defrostable cakes. Frozen toothpaste. Whole roast chickens. Premade galettes that are definitely better than mine. 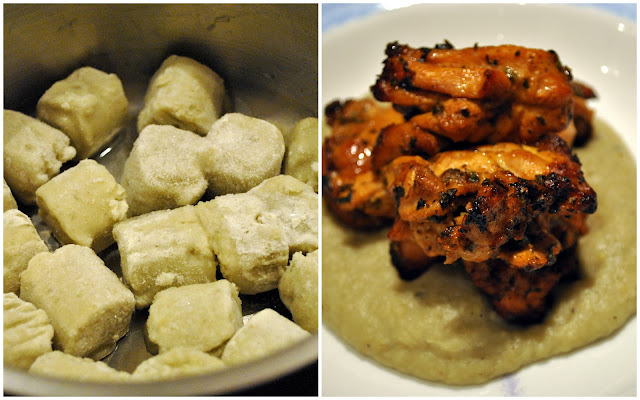 And the crazy thing is that all of it is delicious. Miss Love and I went on a grocery run to Picard when we arrived to stock up on staples like meat and appetizers, and we were impressed with almost everything we tried. One of our first meals when she arrived was simple- tikka masala-seasoned chicken and a mashed potato and artichoke heart dish. It was almost too easy- baking the chicken and mashing the incredibly awesome individual potato canelles in a saucepan, whose poppable shape definitely conjured up thoughts of deep-frying. The result? One of the heartiest and tastiest meals we ate, and it took basically no preparation at all. It ended up costing us around 8 Euro for four servings, so it was economical as well as delicious. 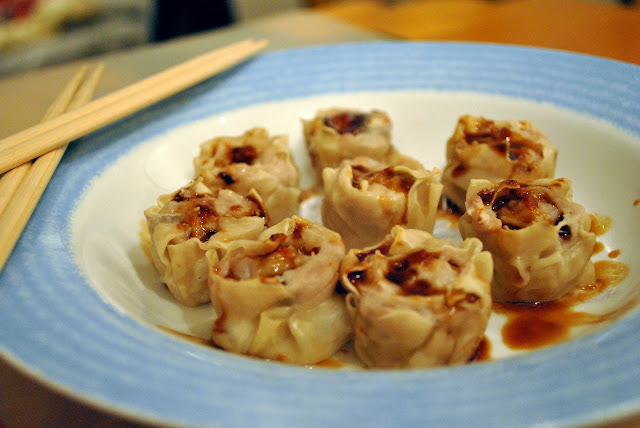 We also needed a snack beforehand, so we noshed on these tasty little “steamer-ready!” shu mai with pork and shrimp. We didn’t have a steamer, which I imagine would have been the most optimal form of preparation, nor did we have the hindsight of putting them in the freezer for 24 hours (Picard has a funny habit of giving you defrosting instructions 24 to 48 hours in advance) so we microwaved them with a wet paper towel on top, and they were tasty and tender, especially with the zesty sauce of indeterminate origin. 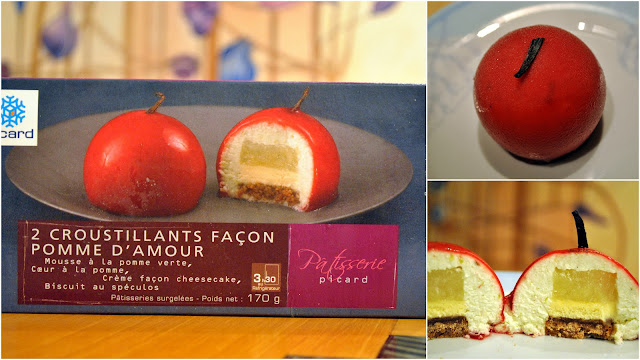 Because it was Miss Love’s first night cooking at home with me again, we decided to have two desserts. Our first was very, very special, not something you’d expect to see at a grocery store. A frozen pomme d’amour, the French take on the classic candy apple treat, but instead of an apple center, it featured a green apple mousse surrounding an apple gelee, cheesecake center, and speculoos base. All the flavors came together remarkably well, and the visual presentation was breathtaking, especially with the little vanilla pod stem! 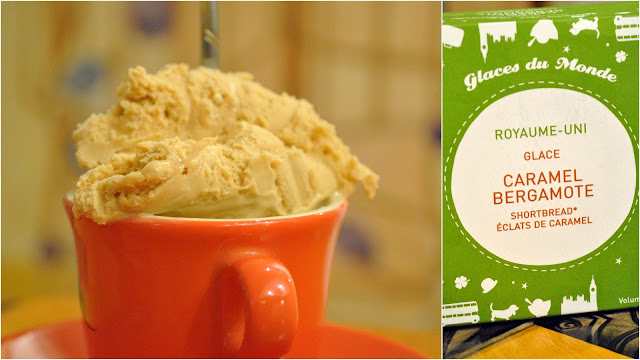 We also shared some ice cream that looked delicious and promising- caramel bergamot with pieces of caramel and shortbread. Unfortunately, the bergamot flavor dulled after the first few bites, leaving only sticky sweet caramel, with little salt to balance out all the sugar. The shortbread pieces were also nonexistent. 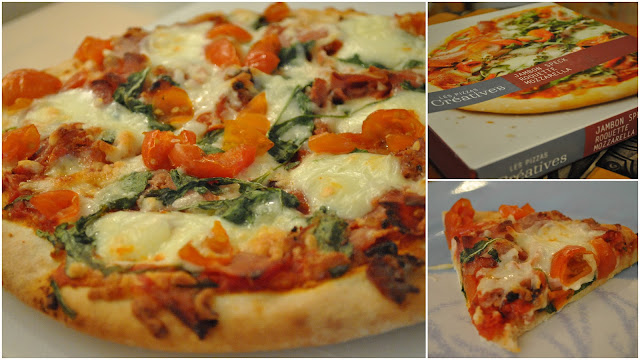 This is a pizza that we ate the next day for lunch. The ingredient list described it as having 48.9% dough and 51.1% toppings, and I believe that to a T. Seriously, this thing was packed with fresh, tasty vegetable and meat toppings, as well as balls of fresh mozzarella. And speck! Crispy, salty speck ham. The only issue was that it was unwieldy in size- not small enough for one person to eat in one sitting, but not easy for two people to share. If I made one of these again, I might serve it with a salad or something on the side. 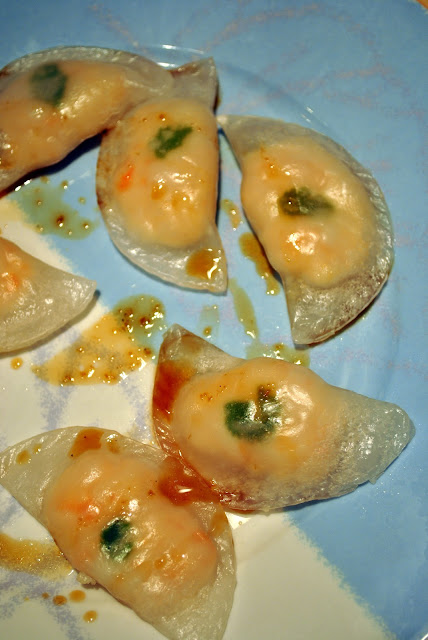 Another tasty appetizer, translucent buns stuffed with whole shrimp and a careful dot of green onion. 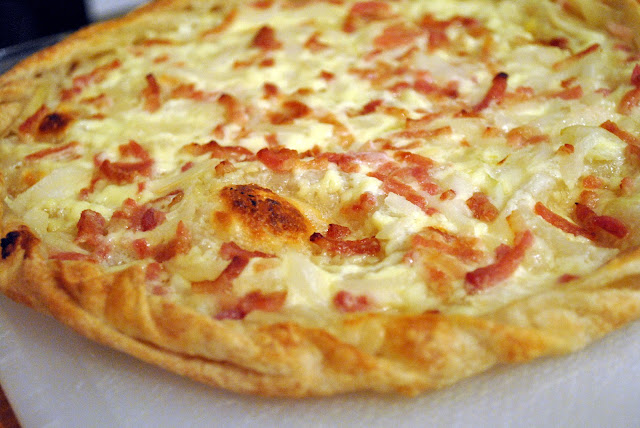 This technically wasn’t from Picard, it was from the Monoprix down the street, but we really enjoyed it. This is a flammekuche, a traditional Alsatian ham and onion tart. 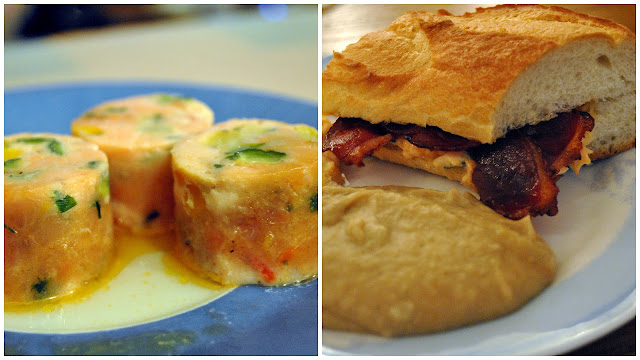 These salmon tartare cylinders came in packaging almost as difficult to unwrap as a CD package. Luckily, the results were worth the effort, especially when eaten in this bitter orange jam and Dijon mustard salmon sandwich with duck bacon. 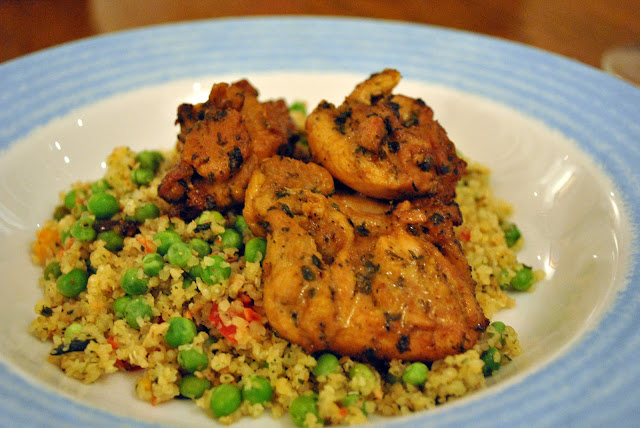 Finally, for our last meal, we enjoyed our favorite tikka chicken again, atop a pile of mixed vegetable quinoa. I normally am not partial to quinoa, but this was a fantastic exception. Three minutes in the microwave and it was hot, fluffy, and stuffed with tender veggies. Leaps and bounds above Green Giant! It was delightful and so easy. Picard is definitely somewhere that I’ll go again, and I can’t wait to see how I can use their other ingredients and dishes.