Scratch all that effluvium from yesteryear about how Pernes’ website was the best website in the history of all websites. Maybe a 3D model would cut it- if this was 2002! (editor’s note: Can we calibrate a record scratch for each time someone silently mouths that to themselves? No? Well, screw you, me.) That information is now as obsolete as an iPhone 4 with a Crazy Frog app and Bing set as its homepage. That frog is dead to me! A new reigning champion has entered the scene of disposable allocation of revenue toward Flash-generated advertising campaigns: Bel’s Apéricube! 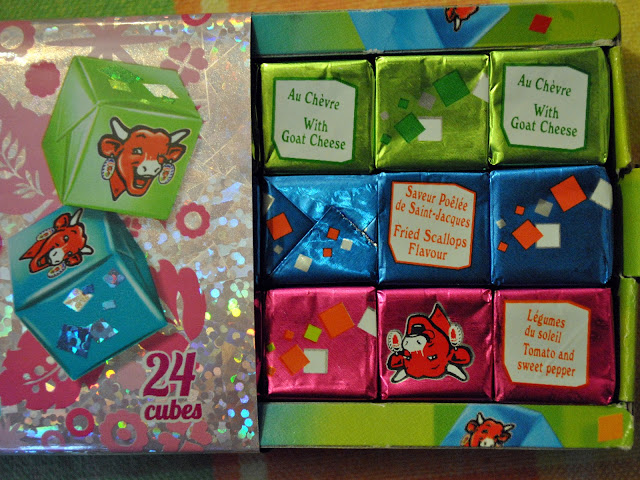 You know them from such family-friendly products like Babybel, The Laughing Cow, and rapping bull GIFs! Say whuuuuuuuh?! (editor’s note: Seriously, that record scratch is money, and you’re an asshole.) Allow me a brief pause to take you through the World of Laughter (yes) and introduce you to the 27 (yes) cows whose bodily fluids are responsible for the Apéricube Girl Party/Soirée Filles selection I’m about to review for you today. (yes, and I’m sorry in advance.)

We start with an agonizingly long wait, presumably while all the freelance website designers of the world collectively sob into their shirts, and are amused by a hot vat of cheese precariously tilting while we wait. Protip: it never falls, which is good? Ish? Once we’re securely in the world of cows, greeted by ominous lowing and prefabricated bird sounds, we meet this guy like eight times and he progressively haunts my nightmares. 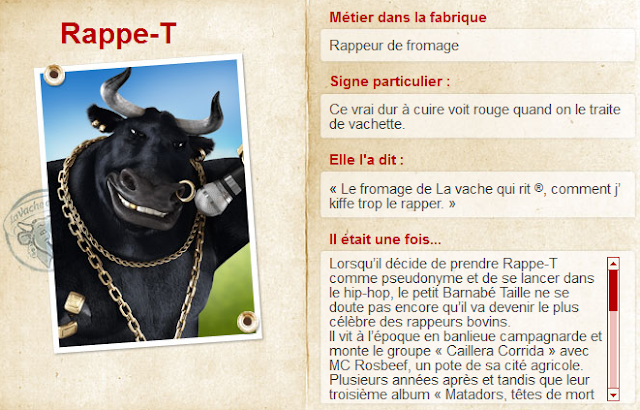 Rappe-T, or as he’s known on the street, Mayor McSleaze, has an extensive bio, and as a result of reading it, I now know more about him than I do about our current president. Sorry, Barack, but have you released a hit single with MC Rosbif? Didn’t think so. So, anyway, this guy exists and raps and apparently, also makes cheese while upsetting real live people on the real live bus and referencing “Twitter” and “blog” with the same apprehension that my grandmother has when she uses her iPad. 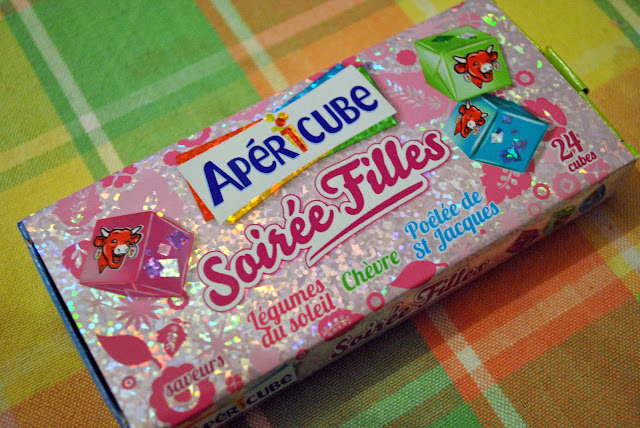 On to the review! Apéricube manages to accurately capture what women like to put in their mouths more accurately than any romantic comedy or yoghurt commercial ever will with their Soirée Filles line: fried seafood, fire-roasted vegetables, and goat cheese, all in soft cheese form. Where my Cosmo cheese cube at, Apéricube!? And they throw in trivia to boot. I will admit a brief moment of intense nostalgia for these. Apéricube existed briefly in the States where, like most delicious foods from the 90’s, they moved quietly to Europe once boy bands started being classified as “a thing.” I ate them as a child and now I am warily writing about them as an adult. 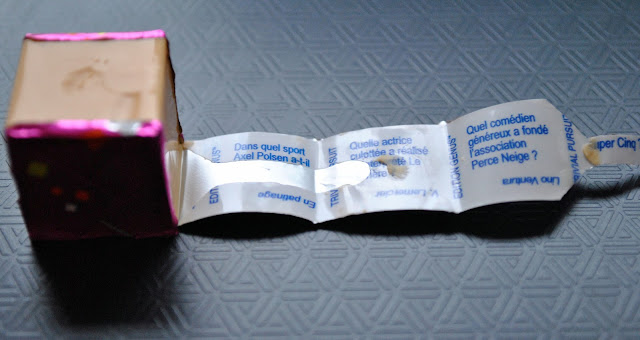 The trivia questions are about as much fun as you could make the timeless experience of squinting to read gooey, cheese-covered facts about sports teams and prime ministers. Fun fact: Two out of three trivia questions are cut off by the packaging. Want to know which sport Axel Pons plays? Well, too bad. You’ll just have to Wikipedia that shit like I did. Uh, well played, Apéricube. 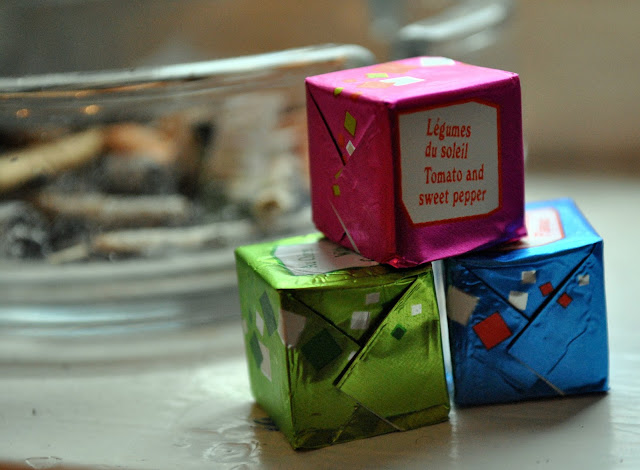 The cubes are smooth in texture. Starting from least offensive to terrifying future food: chevre is unsurprisingly innocuous. Chalky, goaty, and forgettable with the remarkable consistency of toothpaste. Soon! The vibrantly-colored fire-roasted vegetables fares much better, with a surprisingly deep smokiness and lingering paprika and red pepper aftertaste. Definitely something I would toss in an omelette to give it an element of surprise and dairy. 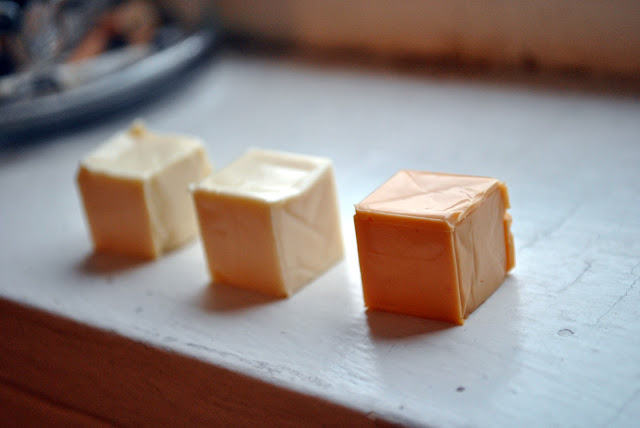 And now, the wild card. The Charlie Sheen of cheese. Why would anyone want to make fried scallops into a cheese flavor? Poêlée de Saint-Jacques is a classic French dish that apparently, the French hate enough to immortalize in soft cheese form. I spat this one out because it was repulsive. It was too close in color and texture to raw scallops to not make it a creepy experience. And it tasted just like them, too, with the beery flavor of fried batter and an oniony aftertaste. Basically, the only cheese-like thing that remained was the creamy texture. 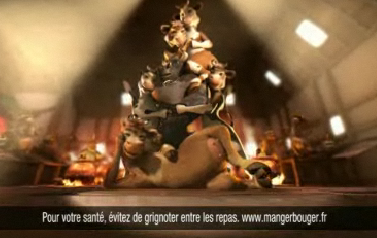 Well, that was awful. Until next time, my compatriots, when I review such dainties such as the Man Party, featuring pizza-flavored cheese, tuna-flavored cheese, and ham ‘n’ olive-flavored cheese. No, wait, that’s not true, because I am not self-destructive. I am done with this noise. Peace out, Rappe-T. Godspeed to you and your pile of lady cows. Farewell, Girl Party. You were the sparkliest, and now you shall hold my hair ties for eternity. 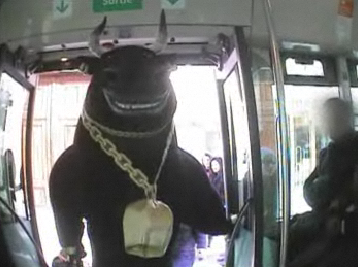 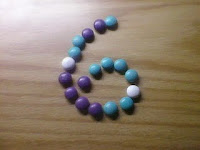