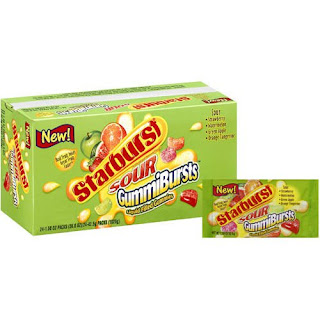 These are funky. I found these two flavors for two for $1.69 apiece.

The sour gummies are heavily advertised, especially during the hours I watch TV, it seems. There are supposed to be four flavors in the bag, and it looks like I managed to bag all of them. In the package there are ten gummies, each about the size of a quarter.

They’re advertised with strawberry, watermelon, orange tangerine, and green apple. They’re a harder gummy, with a slightly pasty outer flavor. There’s a definite aftertaste in the green apple. The liquid is not very sour. My guest reviewer, The Food to my Foodette, and I have high tolerance to sour things, so we didn’t think these were really shocking.

I was most excited to try the orange tangerine flavor, and was happy to discover that it did have a distinct orange taste, but there was something off about it, with a taste that I can only unfortunately liken to the exact flavor of ramen noodles and floor cleaner.

The watermelon was the standard for all watermelon flavored candies, tasted like artificial colors and flavoring. Not much of an aftertaste on this one, but very pasty. I decided that I didn’t like the texture of these after all.

I generally like Starbursts chews to their other little bastardizations, so I figured these would be good. It came with four flavors- strawberry, watermelon, fruit punch, and cherry. Felt like they didn’t come up with new flavors but took their leftover one-hit wonders with some of their standards and came up with the crappiest of candy mix tapes.

The cherry was the standard cherry Starburst, which I really like, because it’s got that creamy taste to it that’s not sour, but takes the acidic edge off the flavor. Same color, reddish cream.

Food didn’t like the fruit punch. It tasted really chemically, like drinking a sweet flavor of bug spray. It had acidic moments which really grossed me out. Not a fan.

Watermelon, Food and I agreed, tasted like watermelon in candy form. The standard. It was creamy, like drinking a watermelon drink. I like that the Starbursts maintain that creamy taste to them. It’s tasty.