Foodette: An exclusive review, coming to you all the way from Japan! My study abroad friend has a sister in Nagoya, and we were lucky enough to persuade her to try the new BK Pumpkin Burger, topped with a ring of fried slices of pumpkin. Get her take here!

“The BK pumpkin burger looked very grandiose on the giant poster in front of BK, maybe even appealing, but still sounded weird, so I was skeptical going in. But after a long 30 minute walk around Nagoya in search of BK and not having eaten much for lunch, I was ready to sit down and try it. After letting Nobu, my boyfriend, order for me, he brought back the white paper wrapped burger marked “HP” for “Heavy Pumpkin”, an option Nobu chose to add extra pumpkin on top as a 100 yen (about $1.20) or so upgrade, and it was indeed heavy on the pumpkin. It was ten layers of thinly sliced kabocha pumpkin with the green skin on the outside, fried and hot.

I knew it was too much pumpkin so I began to pull some out so I could appreciate the teeny tiny burger meat below. This was a difficult task as the pumpkin slices were covered in chopped iceberg lettuce, falling in all directions, and the pumpkin was assembled in a doughnut pattern with a hole in the middle where they squirted the bland, not so flavorful mayonnaise dressing with what I assumed were little black pepper specs mixed in with the slippy, oozing, messy white sauce. So after reassembling my bun, a typical yellowish sesame seed covered BK bun, I bit into it. I made sure to get the burger, the fatty strip of thin somewhat crispy, somewhat soft bacon, the pumpkin, the mayo, and the lettuce all in one bite. The burger tasted like a normal BK flavor, kind of dry, the lettuce was average chopped iceberg, the mayo was relatively flavorless, and the pumpkin was on the sweet side, as expected. Nobu had a bite as well and agreed that it wasn’t so yummy. 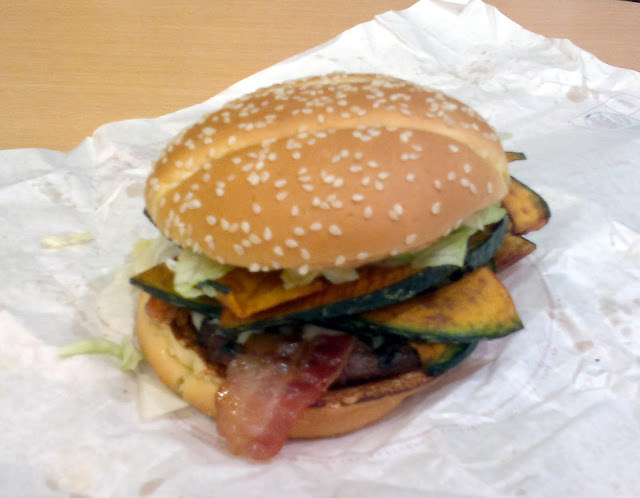 Even the salty little bacon strip couldn’t redeem the lack of flavor. However, we redeemed ourselves it with our Heinz ketchup packets (Pittsburgh represent!) and dipped it into the ketchup, a nice contrast to the sweet pumpkin. It gave it a tang, and made it taste much like sweet potato fries dipped in ketchup on a burger (reminiscent of Primanti Bros but with sweet fries and no slaw). Much better that way. Then we ate the remaining pumpkin slices on the side, still hot and soft, and dipped those in the leftover ketchup like french fries and they were much better that way as well. In the end, we decided it was bland and not very good, and that a more kicky sauce would’ve gone a long way in improving the burger. Our expectations were low going in, and they were met coming out.”

OH MY GOD PUMPKIN FRIES. This is amazing, and I wish I had been there. Until next time, Japan! 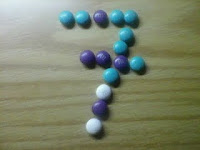