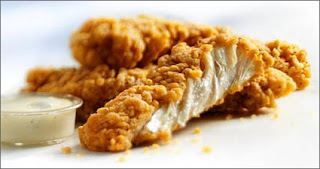 So yeah. The Foodette has officially branched off into a good food, bad food roulette-style blog. Patricia will be showing you the right way to eat, and I will be boldly stepping off into the intrepid “not” section.

My dad brought me McDonald’s today, a rare treat. People will laugh. I will get fatty jokes, probably from malicious exes, but I do not care. I lost fifteen pounds and sprinted today, trying to catch a runaway Bichon, ergo, I deserved it.

So he brought me the five-piece Chicken Selects, which, ironically, I had just read about as one of the top five worst items to order at Mickey D’s. Mmmmm. Coronaries. So tasty. So the McAwesome boasts a whopping 660 calories, 40 grams of fat, and 1680 grams of sodium. It’s a lot to handle, especially coupled with the archetypal- ha ha, arch? Like the golden arches? Fuck it. Coupled with the NORMAL combo of fries and a Coke, or whatever your liquid poison may be, it’s a lot of calories.

I ate the entire box. I was starving. It was also the first thing I’d eaten today, but hey, I don’t need to defend myself. The chicken itself comes with a variety of dipping sauces. A good choice on the part of McDonald’s, because the chicken can tend to be a bit dry.

I don’t know if it’s my KFC or the chain in general, but their chicken is odious. It’s basically batter around gristle. Not this chicken, though. While it’s not Lenny and Joe’s, a review which I must do with gumption, as it is the best chicken ever. Maybe a trip with Patricia? While it’s not theirs, it falls in a pretty solid middle category. The breading is lightly flavored with black pepper, and needs no salt. The sauces- buffalo, ranch, honey mustard, and barbecue- are all solid, good sauces that do well with the chicken.

Texture-wise, this is no McNugget. McDonald’s isn’t fucking with you here, because there’s no guessing as to where the meat comes from. It’s a meatier texture than the Nugget, which had that greasy, softer texture we all knew and enjoyed, but in return, is less greasy. In fact, it’s not very greasy at all. More of a dry breading than anything else.

The pieces are quite large. A good four, five bites apiece. I like them. Three pieces is very filling, five makes a meal. I wouldn’t eat it too often, but it’s too tasty to pass up when you just can’t have homemade fried chicken. For a mass produced place, this chicken is good.