Okay, so a little background. My friend Swagger and I went out yesterday on a delightful quest for an Ocean State Job Lot, which turned into a huge adventure finding and retrieving items from an Asian Grocery.

We got some beverages first, for review. I’ll be doing it all in part by cuisine. We found dollar store beverages and Asian things to show you today. 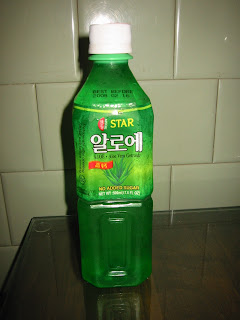 First up was the Wang Dream aloe juice. After giggling profusely at the funny name, we took a sip. The texture is very strange. It’s a very thick juice, and the texture is only comparable to drinking melted Jell-O. At first taste, it tasted like apple-scented shampoo would taste like. On the second round, it developed a muscat-like taste, and the little beads of aloe tasted much better. It was, in all, a really refreshing drink and not horrible for costing $1.70. The texture is a little off-putting, though. I kept expecting it to develop a skin on top, like its Jell-o imitation. We also found a treat I’d been dying to try, but hadn’t really wanted to order online: soda for weeaboos, AKA ramune. The ramune was immensely fun to open, like a grenade launcher, and I felt a real sense of accomplishment when I got the marble down and the soda tried to explode all over my hands.

Unfortunately, the taste was really disappointing. We had the choice of original, melon, Hawaiian blue, and strawberry, and chose strawberry. Swagger said the Japanese don’t like things too sweet, and it was evident in the taste. If anything, the ramune tasted like watery and minimally flavored seltzer. If that was strawberry flavored, plain must be really gross. A huge disappointment, even if the packaging was awesome. We loved the Engrish on the label, too. “Enjoy pop soda!”

That was it for the Asian beverages, as we’d already stocked up on discounted sodas at an Aldi and Ocean State Job Lot before. Onto the discounted stuff. We bought two sodas from a company called “Snow,” advertising crisp, minty beverages, and one ominously nomikered Java Pop. 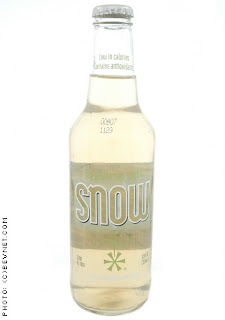 The “Icy Green Tea- Light” Snow pop thing was nothing special in the way of bottle mechanics, like the ramune, and it was encouraged to serve “ice cold”. Okay. So we put our ice batons and waited. We took a sip.

The smell was intense, like we’d just sauntered into a Colgate factory on a hot day. It looked like beer, and tasted like sparkling Listerine. There was no green tea flavor at all. We now understand why these were three for a buck. They were loaded with sugar, 35 grams a bottle, but had no sugary or sweet taste to speak of, and were horrible. We spat them out and dumped the remainder of the soda in the yard.

Okay, so after that astronomical failure, we popped open the Whiteout Peach flavor. Not looking good so far, Swagger said. So we opened it, poured it into our glasses with ice batons, and waited. Took a sip. Again, we hated it. Just spitting out the drink made me feel much better.

I don’t know what was wrong with these two beverages, aside from the glaringly obvious fact that we bought them from a dollar store. But the Whiteout peach was exactly the same. There was no peach taste to find, it smelled like toothpaste, and was sugary on the label, but had no sugar to be found. These just sucked, completely.

I’m not proud to do it, but I have to give the Snow Pops my first zeroes. We spit them out. They were horrific. 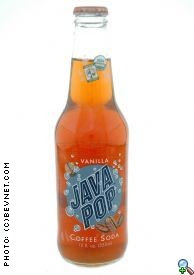 Last up was the ever-intriguing Java Pop, in vanilla flavor. It boasted being all organic, all seeing, all knowing, with pure sugar cane.

We opened it and poured it into the bottle. It had a sickly sweet flavor of sugar and vanilla, like snorting powdered sugar. Upon trying it, we smacked our lips a little, probably trying to see if they stuck together. It did taste like vanilla coffee, that was accurate. In fact, if you condensed it, it would probably taste even better sans bubbles. But this combination was just gross. Soda and coffee is really disgusting. And the sugar this one had almost negated the fact that it was organic. Just disappointing.