I got another package in the mail, from The Fancy Lady Gourmet, and as soon as I opened it, I couldn’t believe how adorable it was.

The packaging itself is exquisite. The packing was baby blue tissue paper, and each confection was packed in a colorful Chinese food carton. I felt like I was opening an individual gift with each one. There was a label on each telling me what I was opening. 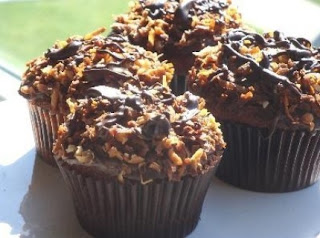 The first thing I tried was a coconut brownie cupcake with graham cracker crust. Now, I’m not really a fan of coconut, but this blew me away. The brownie was like a delicious, dense hybrid of cupcake and brownie, it was definitely an amazing homemade treat. The frosting was a bit hard, which I can expect, being in the mail, so I popped my piece into the microwave and let it nuke for a few. Probably one of the best decisions I’ve ever made. I then realized that the frosting wasn’t frosting at all, but white chocolate with toasted coconut on top. Delicious. It basically turned into a ganache.

This brownie cupcake was fantastic. I think I’m a convert. 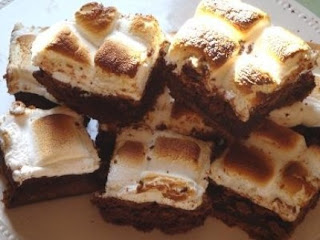 The next treat was a s’mores brownie. Opening this was just like a real s’more! Very gooey good! The marshmallows were nice and toasty brown, but the cake was very dry and had a really strange mouthfeel to it. It left a film in my mouth and a strange aftertaste that I can’t put my finger on. I’m not sure if it was the graham cracker crust or the brownie itself, but something was a little off. I did like how the marshmallows were roasted on top, though, instead of being put in the mix. 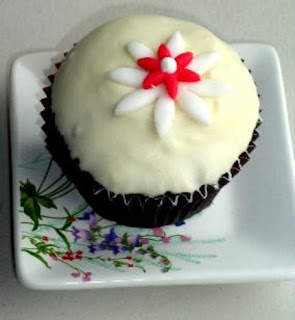 This last one was really the star of the show. It’s an adorable little red velvet cupcake with a lovely fondant flower on top. The cake is a deep, dark, rich burgundy color, almost, and you can smell the cocoa scent of a good red velvet from three feet away.

I almost don’t want to cut into this cupcake, it’s so cute. It’s got a perfect daub of white chocolate on top. I’m torn between eating it or putting it by my bedside table and making it my firstborn child. But alas, I must share with Patricia, as my family ate her last share of baked goods, so…I must cut.

The cake is a little bit dry, but maintains a deep, rich, buttery red velvet flavor that goes perfectly with milk. The frosting is delicious, again, a really buttery white chocolate dollop on top, and the fondant was a pleasant surprise for me. The cupcake was smaller than the brownie, but this was perfect. Any more would have been too much. The density is just perfect with this one.

I strongly recommend these desserts for anyone to try. The Fancy Lady Gourmet is out of Moonachie, NJ, and can be found on her website on Etsy.com

One thought on “The Fancy Lady Gourmet Cupcakes and Cookies”