I spent a few days (okay, about 40 hours) in Frankfurt, Germany, earlier this week. Like my June trip to Seattle, I tried to fit as much as I possibly could into a very short amount of time. I arrived at 6AM Tuesday morning, and spent my first morning acclimating myself with the streets and practicing my esszet (ß) to the chagrin of the people around me. 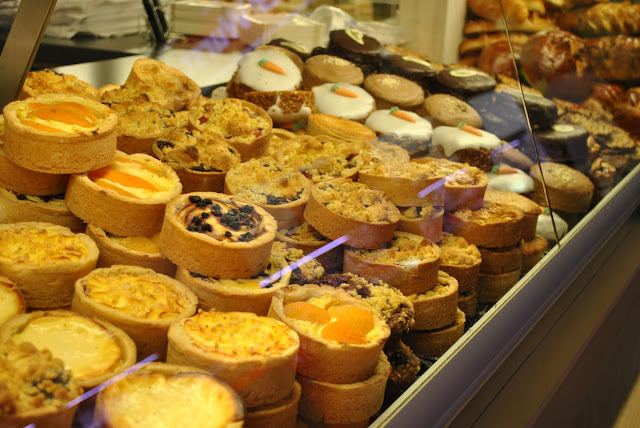 The first stop on my list was the Kaisermarkthalle, a large daily indoor market with meat, fish, cheese, and specialty food vendors. The Kaisermarkthalle is very pretty and open, with large windows to let the sun shine in. I picked up my first meal in Germany here, as well as some gifts for friends and family before heading off on my walk. 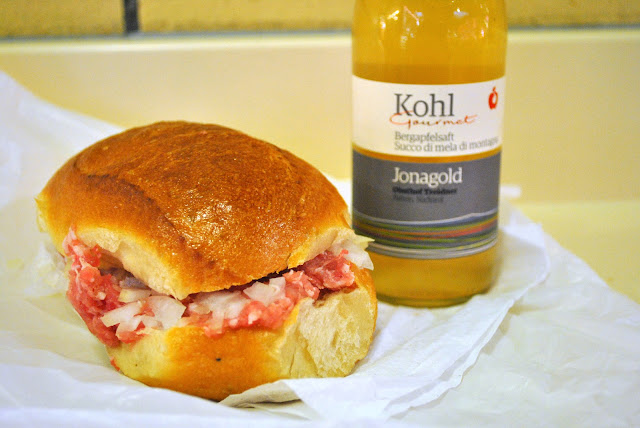 This is mett, a traditional pork tartare sandwich. I watched the quiet woman grind the pork in front of me- curly, creamy-white pieces of fat shaved on pink meat, packed with sweet, juicy pieces of onion atop a freshly baked bun slathered with mustard. Yes, it’s raw pork. No, I didn’t get sick, although in retrospect, it probably wasn’t the smartest thing to eat on an empty stomach at 8AM, but you live and learn, right? What was really amazing, though, was the apple juice, or burg apfelsaft, I had with the sandwich. This was the premier cru, single-origin, artisanal apple juice of my dreams. It blew fresh cider out of the water with a clean, crisp, very concentrated apple flavor, like sticking a straw in a Golden Delicious. I figured it would be a good introduction to another Frankfurt specialty, apfelwein, which I definitely didn’t want to start drinking so early on! 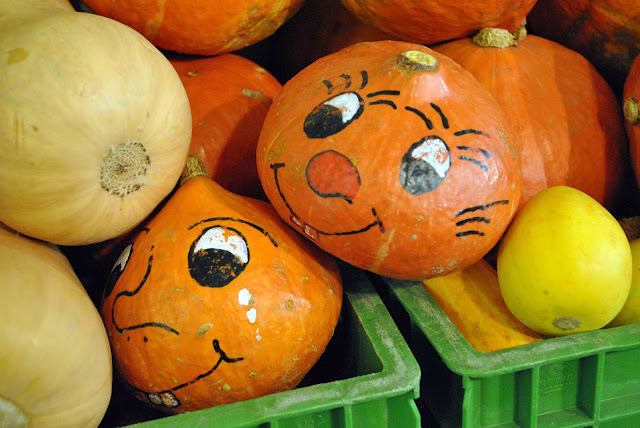 There were plenty of fresh fruits and vegetables, and even a few flower vendors. 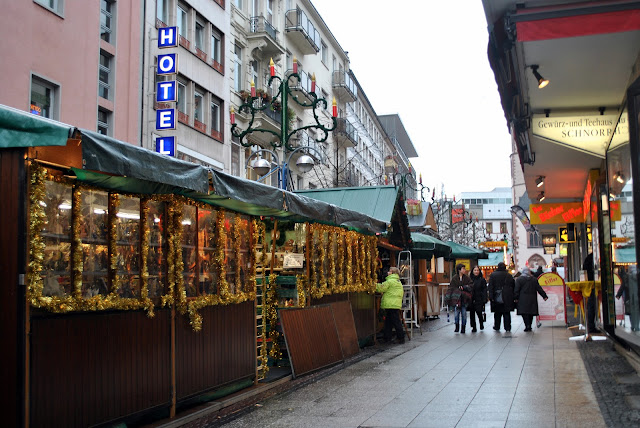 On my way back, I stumbled across the Christmas market, a famed favorite in Frankfurt. Plenty of vendors, from handcrafted ornament sellers to pretty young girls hawking griebenbrot, (fat-smeared bread with crisp onions) a winning combination if I’ve ever seen one, there’s always something fun to find and see. I walked by when they were preparing their wares for the day. The temptation for fresh, hot currywurst was hindered only by the rain trickling down from the sky. 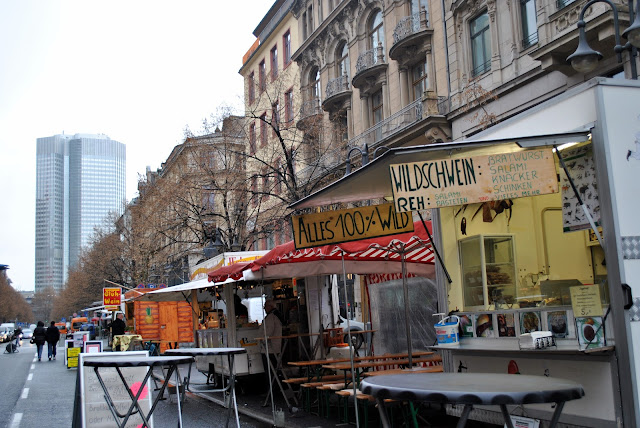 Back near my hostel, (I swear I didn’t plan this) another small farmer’s market was setting up for the lunchtime crowd- financiers from the Deutschebank across the street and hungry travelers popping out of the Metro. After getting lost and briefly ending up in the red light district of the city, I was ready for a little lunch. Look at the above photo and see if you can guess what I ordered! 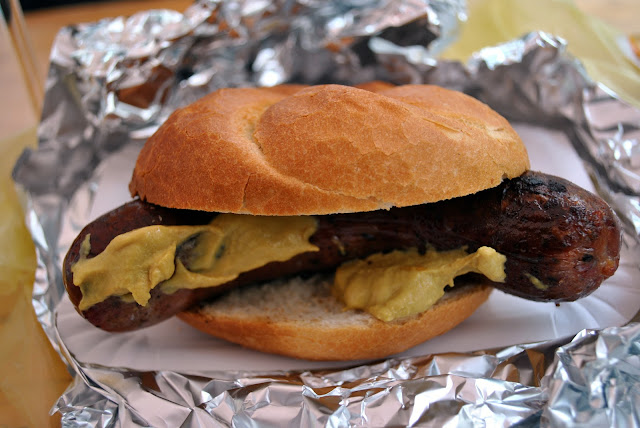 That’s right, smoked wild boar sausage with spicy, sinus-clearing fresh mustard on a buttered bun. Perfection. It was snappy and had just the right amount of fat. It was heavily smoked and seasoned, so I’m not sure that I’d be able to tell identify its swinely origins in a blind test. Regardless, on a chilly day, it was exactly what I needed. Paired with a glass of crisp Riesling to cut the rich flavor, it beat a sit-down restaurant meal hands down. 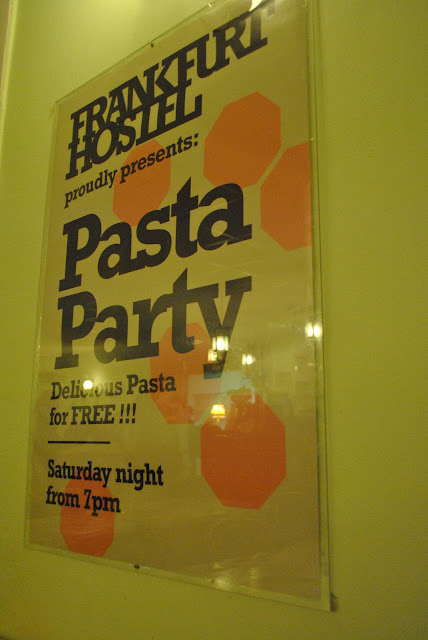 Dinner that night (and the night after) was delicious pasta, courtesy of the free pasta party at the hostel. I wasn’t very adventurous the next day, as I had a few important things to get done, so I ate a quick breakfast and went on my way. 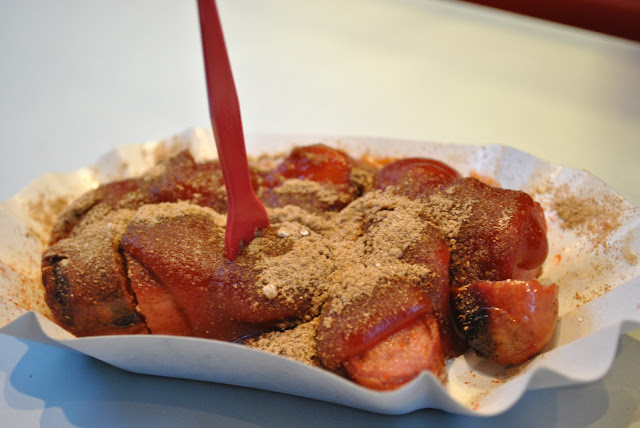 However, later on that day, I was in the business district of Frankfurt and walked by a currywurst stand I’d seen reviews of online. That stand was Best Worscht in Town, a sharp, varied stand with sauces and spices atop various links of meat, not to mention some of the friendliest service I’ve ever seen. A casual inquiry into t-shirts had the young waiter nearly tugging the shirt off his back to give me after seeing that they were out of clean ones. I didn’t take the shirt, but I did order a hot plate of the currywurst of the month. Luck had it that it was a speculoos-infused currywurst, with speculoos cookie paste mixed into the curry sauce and spicy cookie crumbs on top. This was incredible, and probably one of the best meals I’ve eaten in Europe so far. The sausage was crispy and robustly spicy on its own. When doused with the sauce and seasoning, bracingly intense in flavor, it was utterly blissful. The perfect way to bid Frankfurt goodbye- until next time, that is!