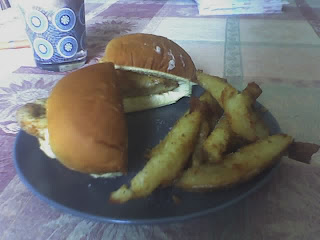 By pure accident, I have perfected fried chicken and french fries. Sorry for the photo…I really do need a good camera!

And I’m going to show you the recipe.

1. Take your chicken breast and tenderize it- roll or pound it down until it’s roughly 1/2 inch thick.
2. Mix together salt, pepper, bread crumbs, and flour. Dip chicken in and coat on all sides.
3. Butter roll and bake potato. Yes, bake it. Once it’s done baking, cut it into fry shapes.
4. Fry chicken in pan at 200 degrees for about ten minutes, or until golden brown on both sides. Let cool.
5. Fry fries at same temperature until crispy and golden brown.
6. Take cooled chicken, fry again for roughly 30 seconds to a minute, take out and serve.

This is definitely the best chicken I’ve ever had. Why? Because it’s so simple. I wanted to do a dry rub, put a sauce on it, and just decided to throw that down the tubes. It’s so simple. Baking the potatoes was genius, and wasn’t even my idea. We had a leftover baked potato in the fridge so I just put it in the fryer. They come out tender and have so much less moisture and starch than fresh potatoes, which ensures that there won’t be a raw inside and that the flesh will be extremely tender, but crisp on the outside.

As for the chicken, the key is in the twice-frying. I let all the juices soak in and then refried it for that extra crispy crust. I had no idea it would taste so good! Seriously. Try my accidental recipe. You won’t forget this chicken easily.