I have a few candies that I picked up at the convenience store that looked somewhat different from your average candy fare.

The first is a sour gecko gummy, made by E. Frutti. He’s a cute little guy, made from rainbow blended pastel gummy with a sour sugar candy coating. For 25 cents, he was mine.

As far as taste goes, it’s…interesting. My first thought was fruit punch, but the overlying taste is a mixture of lemonade and dish detergent. Not the best flavor. The different colors aren’t different flavors, but that might be better because they’re all mixed up, anyhow. It’s a nice chew, with a good give, but evokes more texture-wise of those foamy gummies than a translucent gummy-bear type of candy. It’s a nice snack, but I won’t be rushing out to get him again, cute as he was.

The next snack was really adorable and tasty to boot! It’s an interesting concept, an x-fish. The gummy is in two parts, one outer fish-skin, scaly piece that’s really detailed and translucent, and an inner skeleton with tail and head, like the type you’d see cartoon cats munching on. The skin piece is an interesting flavor. It’s really detailed and pretty to look at, but it tastes like incense might taste, a heady, tea-like flavor. The skeleton comes in a number of colors. I got green, which was an apple-like flavor. The white skeleton part was creamy, but still gummy as opposed to foam. Overall, it’s not a very substantial treat and had that strange tea-taste, but I love the concept and would definitely buy these as favors or as a small treat. 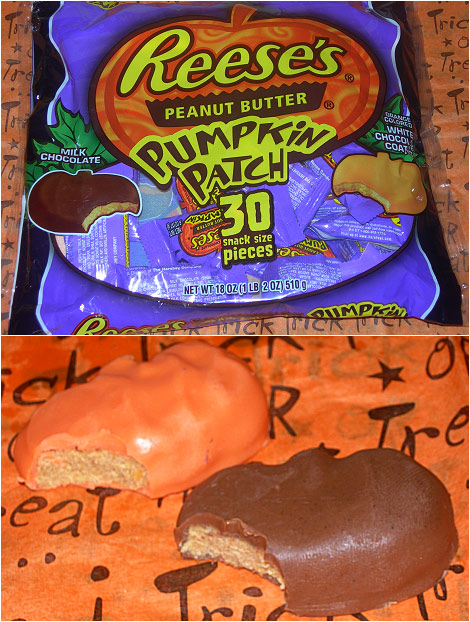 My last treat was for Halloween, a Reese’s Peanut Butter Pumpkin. I like these because of the peanut butter to chocolate ratio. I don’t think there’s a single person out there who buys PB cups for the chocolate quality. It’s the combination, and that damned peanut butter texture, that grainy, graham-y, delicious, peanut butter. So this was a nice treat for me.

I’m not sure if they’re getting smaller or if my appetite is getting bigger, but the little pumpkin was the perfect size for me. They’re fun and rich and tasty.