So it’s nine in the morning. I’m on a bus, it’s pouring outside, and suddenly, I have an epiphany. I haven’t eaten yet, but I only want one thing for breakfast. One thing that I’ve been told is a little hard to find here, and that thing is…falafel.

Where I come from, a small town located outside of New Haven, Connecticut, the most amazing falafel resides at Mamoun’s Falafel, and at any number of equally delicious restaurants. So I’m used to falafel availability, and when I was told that there really weren’t any places, I was grief-stricken.

I’m craving a falafel, wandering the streets, killing time before a group meeting, and then, I see it. Rather, I hear it before I see it. Beautiful, upbeat music, when all the world is quiet, emanating from the tiniest cafe. And there it is. Amanouz.

It’s small, it’s filled to the brim with little things and cute curios. And it’s got falafel on the menu. It’s 9 AM, but I ask anyway. The friendly waitress consults with the big bosses. And finally, they nod.

I just walked in and demanded falafel. And I’m getting it.

So I sit down, and I’m presented with many, many drink selections, alcohol included. I was nervous about this meeting and was highly considering it, but was swayed by the lack of Riesling on the menu, and instead decided to eschew my inner boozehound for some Turkish coffee, inspiring memories of my time in Edinburgh.

Holy crap. I’m sitting in a restaurant in the morning, listening to great music with the offering of booze, and eating my favorite food. If I choke to death, I’ll be so, so happy. 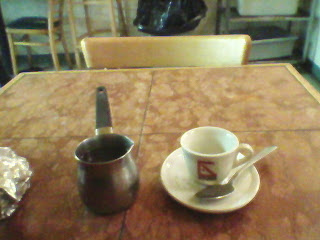 Luckily, I did not. I was brought out the coffee, first, in a lovely little decanter-like pitcher with the quintessential demitasse It’s damned strong, and I drink it black because there’s no need to gussy up Turkish coffee. Without a doubt, this was the most complex, flavorful, and intense coffee I had with little to no bitterness. It was warm, woodsy, dark, and flavored with what I thought were undertones of cardamom, and the little sludge at the bottom. I’m not pretentious, I swear. This coffee was just incredible. 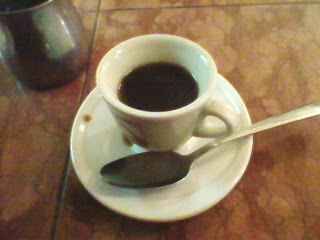 Of course, my main prerogative was this damned falafel, and was it ever amazing. It arrived, wrapped like a baby, in tin foil on a plate. From the appearance alone, it was obvious that this was a homemade pita. So I bit into it, and my mouth exploded, in a word. 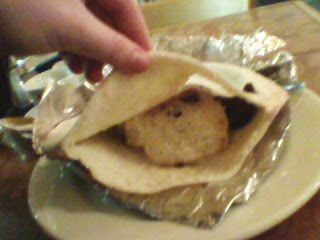 It was sheer joy, wrapped in a hot pita. I’m stretching like a gymnast for complaints, but the falafels are somewhat unwieldy, and the pita to falafel to sauce, hummus and tahini, both homemade, ratio, is not as good as I’d like, preferring it all to be even. But the falafel. Mama, these were something else. First of all, they’re bright green when you bite into them. Parsley. And hot, and flavorful, and crispy. Not a single part of these is mushy, dry, like some that I’ve had, or bland. It’s moist and delicious. The ultimate breakfast. 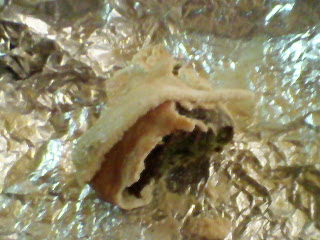 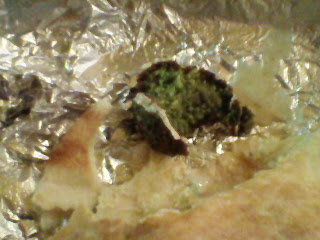 The sauces were great, again, could have been more appropriately partitioned, but do you see how hard I’m looking for flaws? It was amazing. I want it again, now. And you can see what I thought of it. 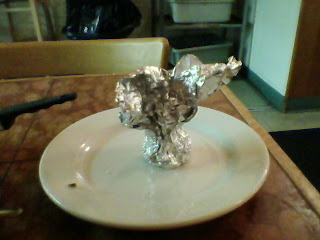 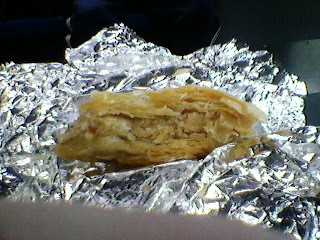 That’s baklavah, ladies and gentleman. I might not have bought it if not for the $10 credit card minimum, which, by the way, was the total of this lovely breakfast. This is a walnut baklavah, and it is wonderful. It is so layered, and also stands up to the ultimate of all trials- the standardized FPT, the Foodette Pocket Test. I wanted to eat this as a little treat later on in the day, so I shoved it in my pocket, wrapped, of course, and forgot about it until I sat on my jacket later and crumpled it in my backpack, and when I went to eat it, I figured it would be a sticky mess and that I’d end up leaving half of it on the tin foil and throwing it out. But no! It stood up, and it was crunchy, delicious, and a complete mystery. How can something so saturated with honey, butter, and nuts still maintain texture and not turn into goo?